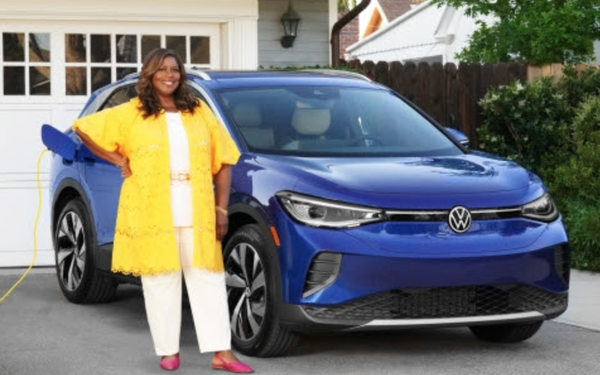 Volkswagen of America and NBCUniversal are partnering with Retta, an actress and author, for an augmented reality shopping experience.

Launching today in prime time on NBC, the campaign will feature a series of @homeShopping custom-content spots showcasing the ID.4.

As programming moves into commercial breaks, viewers will learn about features of Volkswagen’s electric vehicle, with Retta as their personal guide. Viewers can then scan the NBCU code that appears onscreen to unlock an immersive, interactive AR experience that Retta walks them through.

The technology unlocks a simulated showroom experience for audiences, giving them the chance to interact with the ID.4. Additionally, audiences can virtually welcome Retta into their living rooms to highlight the customizable features and options for Volkswagen’s new electric vehicle.

The content will be featured in top-rated shows like "This is Us," "Saturday Night Live" and "The Voice" across multiple platforms including streaming, digital and targeted linear, says Kimberley Gardiner, senior vice president marketing, Volkswagen of America, Inc.

Volkswagen and NBCUniversal signed a multiyear agreement in 2005. As part of the partnership, Universal incorporates Volkswagen's products and brand into its film, DVD, worldwide theme parks and other entertainment properties. Volkswagen supports numerous media and entertainment-related properties of NBC Universal through international marketing and promotional efforts.

"NBC’s innovative and immersive hologram will appeal to our ID.4’s customers interests with the new technology, enticing them to engage with our new EV SUV and share it with their friends," Gardiner tells Marketing Daily. "Retta is a great fit for the brand as she is a witty, optimistic and relatable person who is also a lifelong Volkswagen fan (her father owned a yellow Beetle). We are excited to share the future of our brand with her fans."

Direct-to-consumer sales has been a tough nut for automakers to crack. Most states have legal requirements that constrain auto manufacturers from selling directly to consumers and require buyer contact with a licensed dealer that can provide ongoing service, says Daniel Davenport, senior director in NA automotive at Capgemini, a technology company.

“The digital transformation of some aspects of the buying process is a starting point for OEMs to build and sustain connections directly with consumers,” Davenport says in a white paper discussing direct-to-consumer automotive.