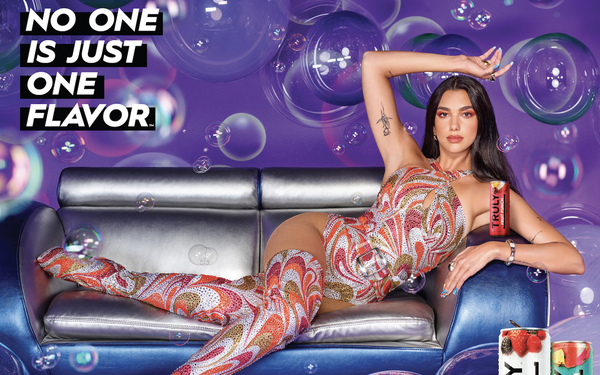 Boston Beer’s Truly Hard Seltzer -- which earlier this month upped its flavor offerings from 23 to 27 -- has tapped singer/songwriter Dua Lipa as the centerpiece of the biggest campaign in its five-year history, “No One Is Just One Flavor.”

The campaign launches Saturday with a 30-second spot on NBC’s “Saturday Night Live” (set to Lipa’s hit song "Physical”) that shows Lipa isn’t just one “flavor” either -- but bilingual, a “dog mom” and a yoga enthusiast.

The commercial -- from Goodby, Silverstein & Partners, directed by photographer David LaChapelle, and also in 15- and six-second versions -- will run through the summer on national TV (linear and streaming), online/digital video and social media, says Truly vice president Don Lane.

The overall campaign, which Lane tells Marketing Daily should run through 2021 and beyond, will also include streaming audio, point-of-sale, out-of-home and a concert series.

Outdoor installations, one each in New York City and Los Angeles debuting in June, will allow drinkers “to show off their own distinctive personalities” by posing amid hundreds of fractalized mirrors generating thousands of angles and reflections. “In addition to being fun, Instagrammable pieces,” Lane says, “the art will act as reminders to show off your many unique flavors -- with our tagline being present as a reminder!”

Truly Hard Seltzer is partnering with producer Live Nation for “Truly Inspired,” a series of live-streamed concerts kicking off in June. Lipa will select artists from four different genres and backgrounds for the shows, with the series concluding in October with all of the artists -- including Lipa -- performing together. Through point-of-sale promotion, consumers will have the opportunity to win a trip for four to Los Angeles to attend the concert, among other prizes totaling over $1 million.

"In this rather polarized day and age, Truly has opted to openly celebrate the many sides of all of us,” said Jeff Goodby, co-chairman of Goodby, Silverstein, in a statement. “It's a big, open-armed gesture of acceptance that is really needed right now,"

In addition to Goodby, Silverstein, other agencies involved in the integrated marketing are Hearts & Science (media), 360i (digital) and MullenLowe (PR).