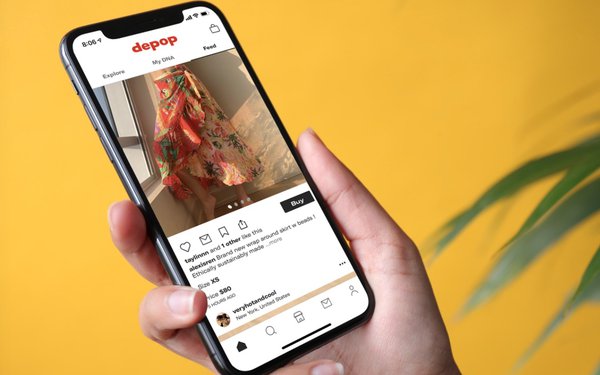 Etsy is buying Depop, the U.K.-based fashion resale marketplace, for $1.63 billion. With the acquisition, it's going up against the circular-fashion world's establishment, including ThredUp, Poshmark and the RealReal.

But Depop differs a little in that it dominates the attention of younger shoppers. Its Gen Z fans see the site as a community as much as an ecommerce platform. It says about 90% of its active users are 26 or younger.

The generational advantage is significant. While more and more buyers of all ages are flocking to resale, it's become a mania among young shoppers. In its most recent report on American teens, for example, investment company Piper Sandler reports 47% of its sample say they've bought secondhand clothes, and 55% have sold them.

Thrift and consignment stores leaped to No. 10 as teens' favorite retailer, up from No. 23 in Piper Sandler's previous research.

Etsy says that among Gen Z consumers in the U.S., Depop is the 10th most visited shopping site.

Depop, launched 10 years ago, will stay in its London headquarters, run as a standalone marketplace with its existing team. Last year, its gross merchandise sales were $650 million, and revenue was $70 million. Each of those represented a gain of more than 100% from the prior year.

“Depop is a vibrant, two-sided marketplace with a passionate community, a highly differentiated offering of unique items, and we believe significant potential to further scale," says Josh Silverman, Etsy's CEO, in the announcement.

He says it "aligns well with Etsy's DNA and mission of Keeping Commerce Human."

Etsy projects the resale market is growing at about 39% annually and expects it to reach $64 billion in 2024. That growth rate is roughly double that of the fast-fashion market.

The Brooklyn-based Etsy is in many ways already in the resale business, with vintage clothing and other items among its best sellers. And it also owns Reverb, which sells new, used and vintage musical instruments.

While resale companies have had plenty of hiccups, especially following public offerings, some observers are pleased. The Depop deal "reflects retail's ongoing shift from a passive to a participatory model," writes Neil Saunders, managing director of GlobalData. He says the resale market will continue to grow, "fueled by an interest in sustainability, a desire for uniqueness, and the rise of the participatory consumer who wants to trade as well as buy."

“The acquisition expands Etsy’s fashion vertical from about 10% of its gross merchandise value to about 16%,” writes Jason Helfstein, an analyst who covers the company for Oppenheimer. “But more important, it positions the company to better compete with Poshmark and ThredUp for younger consumers.”

Depop has about 30 million users, compared to 70 million for Poshmark.  Helfstein says the deal gives Etsy “sticky and active users.”

About 45% of the Depop crowd are between 15 and 18, and 36% are 19 to 25. “Buyer retention and frequency on Depop is stronger than on Etsy's core marketplace, as the average buyer purchases about six products per year. Social engagement on the platform is strong, with 50 million messages sent per month,"  Helfstein adds, pointing out that about 75% of sales are from existing buyers.