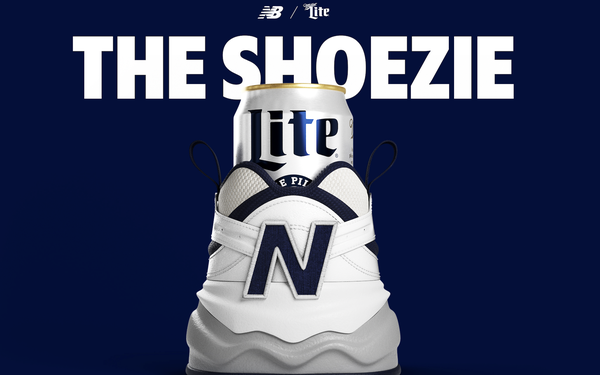 Keep the “father of lite beer” cool with a koozie (insulating sleeve) crafted from a classic “dad shoe” and you’ve got, yes, a Father’s Day “Shoezie.”

This tie-in between Miller Lite, born in the mid-‘70s, and the New Balance 624, also around for decades, will be released in a limited edition of just 50 units, to be awarded in a Father’s Day sweepstakes.

Like the New Balance 624, whose numerous accolades include a recent ranking as the top overall “dad shoe” by Spy.com, the Shoezie features a super-chunky rubber sole and breathable leather, and is said to keep your feet – er, beer -- supported and comfortable.

The 50 Shoezies will be awarded at random on June 20, Father’s Day, to anyone (21 and over, of course) who visits www.TheShoezie.comstarting at 10 am ET.

The Shoezie Drop, as it’s being called, will be promoted through earned media, paid and organic social media, paid  influencer marketing and influencer seeding.

DDB Chicago and San Francisco, the creative agency, did a photo shoot using real-life dads as models in such tasks as watching TV standing up, keeping the garage clean, searing a perfect steak and of course, wearing New Balance 624s, and drinking Miller Lite. "We didn't want actors because dads are already so good at doing what they do,” said Ben Wolan, executive creative director, DDB San Francisco.

“Together we want to thank all dads out there for keeping the grass cut, grilling those perfect meats, agreeing to the family dog, and of course raising a Miller Lite, one can at a time," added Sofia Colucci, vice president of marketing, Miller Family of Brands.

ICF Next is handling media relations and the influencer partnerships. The influencers haven’t been revealed yet, but will feature “iconic influencer dads, or those known for their love of dad fashion.”

The brand, due to debut June 14, comes from YouTube partiers and pranksters The Nelk Boys, who are in open rebellion against what they term “shitty skinny can bullshit.” “Like c’mon, why is every hard seltzer in a shitty skinny can?,” they write on the Happy Dad website.

Tall, skinny cans, which hold the same amount of beverage as standard cans, have traditionally been used by hard seltzer brands to convey that they’re low in calories – even when they may not be as low as a light beer in the standard can. Happy Dad, though, does tout that it has just one gram of sugar and 100 calories per can, along with such features as low carbonation, electrolyte infusion, limestone-filtered water and gluten-free all-natural flavors.

The brand also has built-in influencers driving its marketing. The Nelk Boys, with over 6 million YouTube subscribers, announced the brand this week with a 33-minute video on that platform and are also promoting Happy Dad via their other popular social media channels. 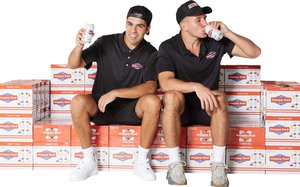 Available in four flavors -- wild cherry, lemon-lime, watermelon, and pineapple -- Happy Dad will be on sale June 14 at California retailers and online in “select states” via HappyDad.com. According to a Happy Dad tweet, retail distribution will expand to Nevada in July and to Texas in August.

Happy Dad is being brewed by Minhas Craft Brewery of Monroe, Wisconsin.

And yes, these are the same Nelk Boys whom you might remember from their stunt in 2015 when they told Los Angeles cops that they had “coke” in their car, but it turned out to be the soft drink, not the drug. A video of that prank now has over 44 million YouTube views.