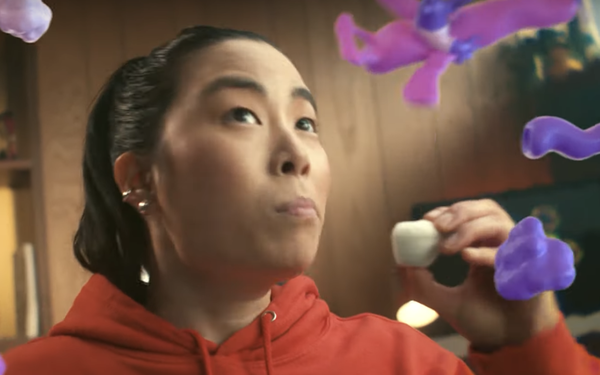 It’s a multimedia initiative with placements across digital and social media, linear and connected television and out-of-home ads in major markets.

Sensations and experiences are depicted in spots like “Escape Room” in which a girl bites into a 100-calorie cookies-and-cream My/Mochi iteration. Pink and purple figures suddenly begin to float around her as her face takes on an expression of wonderment.

Similar expressions and 3D figures accompany a guy eating a sweet mango My/Mochi and a girl munching a strawberry-flavored treat.

“The idea of melting one’s mouth mind is a bit of a mouthful, but it’s about connecting your mouth and your mind to this wonderful snack,” My/Mochi Ice Cream managing director and CMO Russell Barnett tells Marketing Daily.

The target audience is GenZ and millennials because “they snack more than they eat meals, they love sensation and they love an experience.

OOH placements include the LinkNYC network in New York—consisting of hundreds of sidewalk kiosks bearing digital displays. Those are supplemented by traditional billboards alongside major highways and thoroughfares.

The food company Mikawaya was credited with introducing the mochi form of ice cream to California in the late 1990s. Mikawaya is now owned by an investment fund managed by Lakeview Capital Inc., which bought My/Mochi Ice Cream in January 2020.