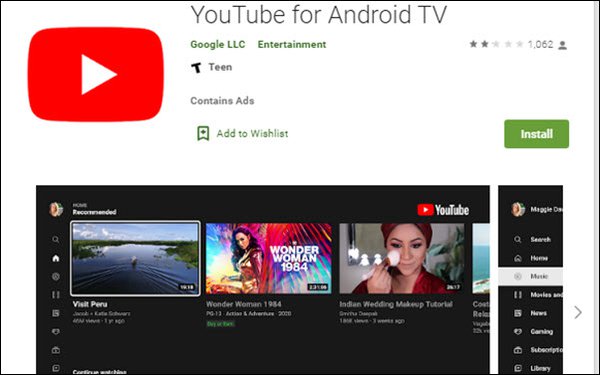 Control service access and data, and you control user bases and ultimately advertising. Little wonder that the leading connected devices have become so powerful.

In the United States alone, shipments of connected TV devices grew by 14% in Q4 2020, to reach 36.1 million units, for a total of 349 million devices installed in U.S. homes, Strategy Analytics reported in March. Digital media streamers and smart TVs accounted for more than 80% of shipments.

That, of course, is why the battle among connected device brands is followed so closely.

New data from the Google Play Store points to Android TV — once considered a relatively minor Google venture — to be outpacing the growth of other connected-TV devices, including giants Roku and Amazon Fire TV.

The data show the YouTube app for Android TV, which is preinstalled in all Android TVs, having recently exceeded 100 million installs, notes Android Police. That's a reasonable proxy for getting a handle on the Android TV's OS install base as a whole.

That’s double the 50 million Google reported a little over a year ago and more than 20 million higher than the 80 million streaming devices powered by the Android TV operating system reported by Google in May.

Roku and Amazon Fire TV both reported about 40 million active users as of May 2020. Fire TV’s last update, in December, reported 50 million-plus users, while Roku reported 53.6 million as of March.

As of the end of 2020, Strategy Analytics, which uses data, rather than surveys, for its estimates, pegged Android TV’s global install base across TVs, dongles and other connected-TV devices at 5.9%, versus 6.4% each for both Roku and Amazon Fire OS. Samsung’s Tizen had the largest share of any single brand, at 12.7%.

(Before you reach for that comment button, let me underscore that "install base" is different than sales or usage stats, and that, at least within North America, Roku is the market leader in smart-TV sales, with a 38% share in the U.S. and 31% share in Canada as of year-end 2020, according to NPD Group data.)

Further, as NextTV points out, as Google expands its D2C connections, a growing number of MVPDs are adopting Android TV via the Operator Tier of the product.

That began at least as far back as 2019. Google made Android TV attractive to MVPDs with implementations that boot to the pay-TV provider’s app while also providing access to the massive array of apps on the Google Play store, allowing pay-TV users to use those apps without having to toggle to another connected device or a smart-TV’s operating system, noted Light Reading’s Jeff Baumgartner.

At least initially, Google also skipped taking a cut of MVPD subscriptions and VOD transactions purchased within the pay-TV provider’s app. That helped “create parity between the video service being offered on an inexpensive operator-supplied Android TV box and what a pay-TV provider could offer via an app for retail TV-connected streaming devices from Roku or Apple,” Baumgartner noted.

All in the service of trying to establish Android TV as a preferred OS for the operator community, so as to help achieve Google’s ultimate goal of gaining access to as much data and analytics as possible, to drive advertising.

Looks like that and other install growth strategies have been paying off.