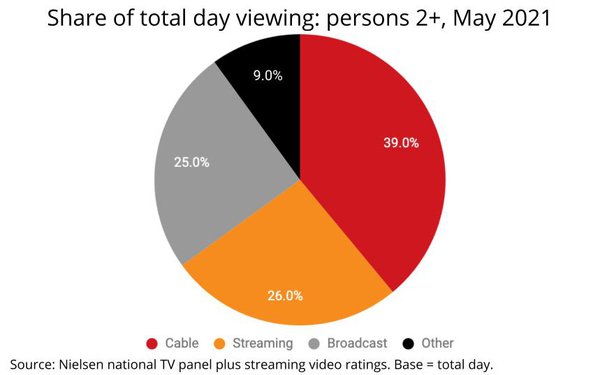 Streaming now accounts for 26% of all U.S. television viewing time, versus 39% for cable and 25% for broadcast, according to the first Nielsen report using a new metric dubbed “The Gauge.”

Gaming and viewing saved video content on DVR account for the remaining 9% of TV screen time. (The metric does not capture television watched on phones or other devices.)

In other words, 64% of viewers’ TV time is still spent on traditional linear.

But streaming is growing quickly: Its share was at 20% last year and 14% in 2019, and could reach about 33% next year, according to Nielsen.

One shortcoming: HBO Max is currently not broken out in the report, since it's not measured as a discrete service in Nielsen's analysis.

That was noted and commented on by Netflix co-CEO Reed Hastings, who tweeted: “Wild that most TV time in USA is still legacy linear. Stream team needs to up its game." Hastings added: "@jasonkilar we need you on the board." (Variety later clarified Hastings' meaning via Netflix: He was encouraging Kilar, CEO of WarnerMedia, to participate in the new metric, or appear "on the board" when those numbers are posted each month.)

That was a turnaround for Hastings, who called Nielsen's original streaming data, launched in 2017 and based on audio recognition software in Nielsen devices in 38,000 U.S. homes, "not accurate, not even close." With the launch of The Gauge, Nielsen is "in a good place to referee or score-keep how streaming is changing the U.S. landscape," Hastings commented to The New York Times.

Kilar responded to Hastings' tweet about The Gauge by referring to a summary pie chart released by Nielsen that shows cable's 39% share in green. WarnerMedia “is already on the board strongly in that largest green pie piece Reed (TNT, TBS, CNN, HBO, [CNN]…). Proud to serve customers in whatever way they choose… Fun to also be the crazy fast(est) growing upstart in @hbomax (2 Qs straight of 2.5M+ US sub adds).”

Nielsen's new metric, which will be the basis of a monthly report, is underpinned by Nielsen’s new Streaming Video Ratings, launched in April – a syndicated service offering metrics comparable to Nielsen’s linear TV metrics across the top 10 streaming platforms and seven categories of apps.

In April, Nielsen reported Netflix’s share of view time among streaming-capable homes at 7% (a different metric than the new one's percentage of total TV-screen view time). 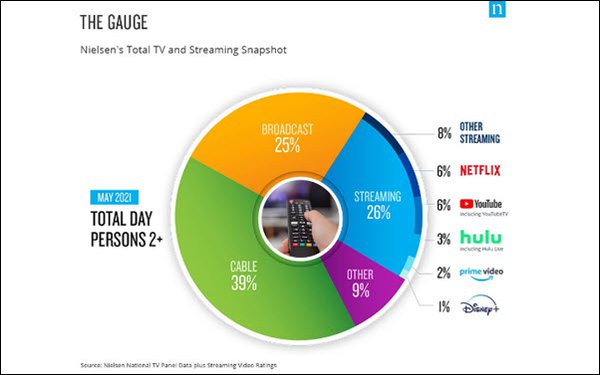