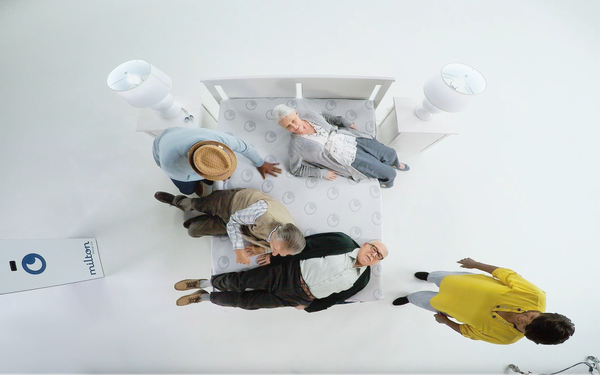 Dormae Sleep Products, a Texas-based mattress manufacturer, may not be a household name, but there’s a good chance you’re sleeping on one of its beds. The company has made mattresses for major retail brands for more than 70 years.

When they were asked by one of their major brand partners to purchase compression technology to manufacture foldable, bed-in-a-box mattresses, the company jumped at the opportunity to be on the next level of mattress creation.

But the technology sat unused for two years, when research revealed that older demographics didn’t necessarily trust the concept of a bed-in-a-box.

A partnership was struck, and GCF began work on creating an entire brand —  name, packaging, online presence, and advertising — from the ground up.

Milton Sleep Co. makes its debut over the July 4 weekend as a startup bed-in-a-box brand from a manufacturer with 70 years of industry experience.

“The name was one of four complete brand concepts we tested,” said John Trahar, creative and strategy lead at GCF. “It's a family business, and Milton is the first name of the founder. In the test, Milton won hands down.”

GCF also created the company logo, packaging, website, and advertising. This was the first time the agency created all aspects of a brand.

“We have done many complete rebrands including new name creation, but this was the most comprehensive,” said Trahar. The biggest challenges, he added, were “waiting on the typical COVID hiccups and working through the organizational logistics of shifting to a consumer direct model.”

A 90-second commercial directly addresses reasons to hesitate when purchasing a bed-in-a-box: Older consumers don’t believe in them, much less buy them.

In the spot, a handful of septuagenarians watch as a mattress is unboxed. They mock the concept, but quickly change their tune upon testing the mattress. “70 years of mattress-making experience; first day on the internet,” says the voiceover.

“We’ve made all kinds of mattresses for seven decades, so we’ve seen what works best for people,” said Michael Karotkin, CEO of Milton. “As a U.S. manufacturer working directly with consumers, we can offer a better product with no unnecessary markup.”

A series of 30-second ads give off serious "WandaVision" vibes, with an homage to bedroom styles and mattresses of yesteryear. "Chances are we slept with your parents. And your grandparents," says one ad.

Milton is remaking the concept of direct-to-consumer into manufacturer-to-consumer.

“The frontier is opening for manufacturer-to-consumer brands,” concluded Trahar. “Recent delivery issues for all kinds of products have shown people the primacy of the supply chain. The closer you are to it, the more control you have over it.”