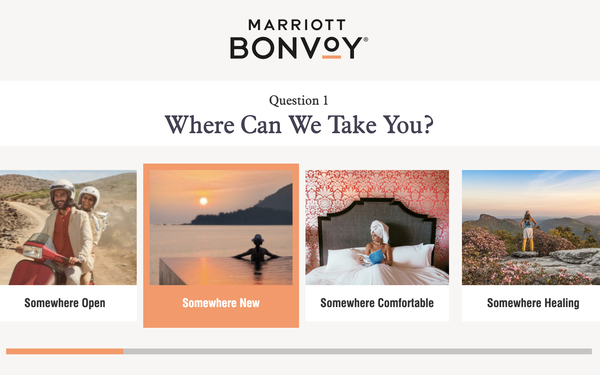 Marriott is launching a massive global effort for its Bonvoy brand, including an activation on Pinterest.

A personalized experience at two Soho storefronts will guide consumers to an in-app quiz to get inspired, learn about properties and book their dream trip with Marriott Bonvoy and its portfolio of 30 brands.

The experience takes people through four questions to gauge preference on travel styles, destinations and experiences. The end result is a Pinterest board tailored to the user’s travel motivations, affording all the tools and direct links needed to book their dream trip.

"We wanted to tap into this cultural truth to harness the power of community and communal input to foster the collective sense of ‘us,’" Povinelli tells Marketing Daily. "With innovation at the root of our campaign efforts, the chance to be the first brand to execute an out-of-home activation with the social platform is a one-of-a-kind opportunity to inspire community and connection through travel planning."

Marriott’s new tagline “Where Can We Take You?” aims to evoke not just physical, but personal and spiritual destinations. The line and the campaign underscore the brand’s belief in travel’s ability to help one grow, heal and find common ground.

The company declined to reveal specific spending, but said it was its biggest campaign to date.

"Our paid media strategy for the campaign is broadly targeted to meet the moment," Povinelli says. "The core message speaks to ‘us’ as a collective, where we are reaching a wide-ranging demographic of post-pandemic leisure travelers at scale with bespoke messages based on travel behaviors. The Pinterest activation, in particular, ties back to campaign by facilitating communal input with captivating visuals and data points that passersby will find interesting, while fueling lower funnel media."

Marriott Bonvoy has evolved from a rewards program to an immersive and inclusive travel platform, Povinelli says. The campaign debuts in the U.S. and Canada starting in summer, with fast follows in China, Australia, Europe, Middle East, Caribbean and Latin America, Japan, South Korea and other markets.

The campaign, which includes a 30-second anthem, was directed by Hoffman/Metoyer in conjunction with creative agency 72andSunny and filmed in Shanghai, Barcelona and Los Angeles. Another 30-second spot, “Travel Connects Us,” features emotional reunions.

The “Power of Travel” campaign will air during the NBA Finals, and also during the Olympics, which the brand calls “the world's biggest stage for global unity and connection.” Additional efforts span globally over the next few months across streaming and key collective viewing moments on television, in-flight entertainment, digital, social and out of home placements.

The effort also leverages TikTok to invite users to set their personal travel memories to an inspirational soundtrack of the campaign’s mantra.