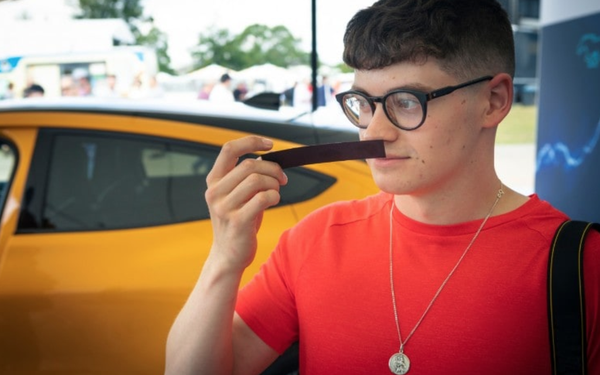 Ford Motor Co. has created a fragrance to promote its Mustang Mach-E electric vehicle, designed to appease those who like the smell of internal combustion engine vehicles.

In a Ford-commissioned survey, one in five drivers said the smell of petrol, or gasoline, is what they’d miss most when swapping to an electric vehicle, with almost 70% claiming they would miss the smell of gas to some degree. Gas also ranked as a more popular scent than both wine and cheese, and was chosen by about the same percentage as those who liked the smell of new books.

The fragrance, which was given the tongue-in-cheek name “Mach-Eau,” fuses smoky accords, aspects of rubber and an “animal’ element” to give a nod to the Mustang heritage, according to the automaker.

Ford revealed the fragrance recently at the Goodwood Festival of Speed, an annual hill climb featuring historic motor racing vehicles held in the grounds of Goodwood House, West Sussex, England. Attendees were invited to check out the scent on fragrance sample sticks.

The scent, which is not available to buy, is part of Ford’s ongoing marketing mission to help dispel myths around electric cars and convince traditional car enthusiasts of the potential of electric vehicles.

Almost a quarter (24%) of survey respondents claimed they would miss the performance of gasoline cars if they made the swap, yet the Mach-E GT’s all-electric powertrain has a 0-62 mph acceleration time of just 3.7 seconds.

The Mach-Eau fragrance was created by fragrance consultancy Olfiction, with ingredients that each add a specific element of the scent’s story.

The starting point was to look into the chemicals that are emitted from car interiors, engines and gas. This included benzaldehyde, which is an almond-like scent given off by car interiors, and para-cresol, which is key to creating the rubbery scent of tires.

These were blended with ingredients like blue ginger, lavender, geranium and sandalwood that added metallic, smoky and further rubbery accents.