For A Record BTS Year, OshKosh B'gosh, Dick's Are Throwing It Back 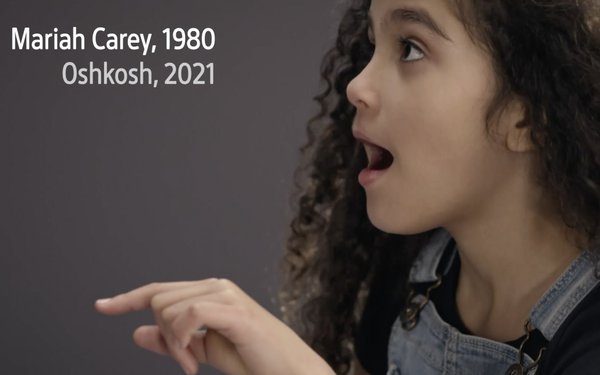 In what it says is its biggest campaign in 10 years and its biggest back-to-school push ever, OshKosh B'gosh is introducing ads themed "Today is Someday." Each stars young versions of famous icons, including Mariah Carey (played by her daughter, Monroe), Muhammad Ali (as he lays out a teddy bear) and rap duo Outkast.

The spots are a departure, focusing on kids who are more interested in finding their own voice than looking cute in overalls. Because so many kids haven't been in a classroom in months, "confidence is key," says Jeff Jenkins, executive vice president of global marketing at Carter's, which owns the brand. "We wanted to celebrate style to give kids the confidence to go back to school. And we wanted a fresh way to talk about style."

He tells Marketing Daily that the ads, created with Shaquille O'Neal's Majority agency, are launching with the Olympics. And they are scheduled to run across NBC connected TV and YouTube, with additional digital and social support.

Jenkins is aware most kids in the brand's audience couldn’t identify these icons. "But millennial parents came of age as Mariah Carey and Outkast were becoming style setters," he says. "And with the Olympics, Muhammad Ali is a perfect fit."

He says the point is that kids everywhere can relate to singing into hairbrushes, shadowboxing or rapping on their own. "We chose these people because each has their own story to tell, as do kids today."

Dick's Sporting Goods is also running new ads, including one with a remix of the classic theme song from "Welcome Back, Kotter."

While Gen Z's familiarity with sweathogs or 1970s TV shows is likely nil, the campaign relies on two popular TikTok influencers, with a combined 9.5 million followers. And more than a dozen other teen influencers make appearances.

The Pittsburgh-based retailer is also introducing a separate campaign. Called "Bust A Move," it stars ubiquitous celebrity dance duo Stephen' tWitch' & Allison Boss, who have been Reebok-ing for the retailer since April. Set to Young MC's “Bust A Move,” the ads promote DSG, the retailer's private-label athleisure brand.

Families with kids K-12 are likely to shell out $849, up $59 from last year. The increase is even greater for college kids, with students and their families earmarking $1,200 on college or university items, a gain of $141 from last year.

Just over half -- 51% -- have already started shopping, with 39% of survey respondents saying they took advantage of events like Amazon Prime Day, Target Deal Days and Walmart's Deals for Days.