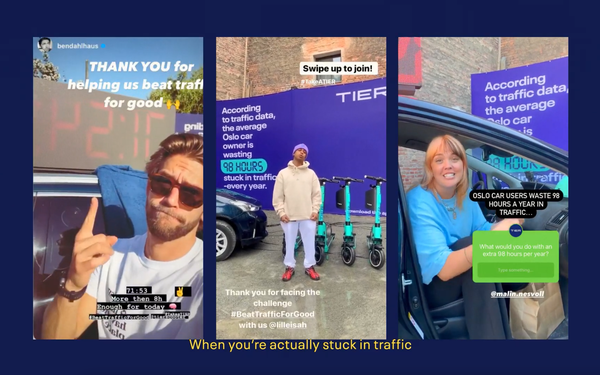 It’s no secret that people spend hundreds of hours stuck in traffic every year getting to work and other places, wasting time, energy and resources and contributing to the world’s carbon emissions problem.

With that in mind Berlin-based E-scooter maker Tier Mobility and Stockholm-based creative agency Around You launched an influencer-driven protest movement across Europe to highlight the waste and environmental harm that results from the world’s traffic jams.

The protesters spent hundreds of hours in their cars in cities like Gothenburg, Sweeden, Berlin, Paris and Oslo whiling away the hours playing instruments, meditating, getting tattooed and other activities (including sleeping and eating).

The campaign was live streamed in to more than 40 countries and over time viewers could see the participants suffering from stiff backs, heat, fatigue and extreme boredom—essentially the same ill-effects drivers suffer when stuck in traffic.

The main ideas were to create awareness, start conversations and maybe sell an E-scooter or two.

“Our goal was to raise awareness about the time we waste in traffic, the unnecessary emission that it brings and that we need to change the way we move around in cities,” Pia Mader, creative lead at Around You. “Our campaign that started in Sweeden and became an international revolution is a great start but hopefully just the beginning of something even greater.”