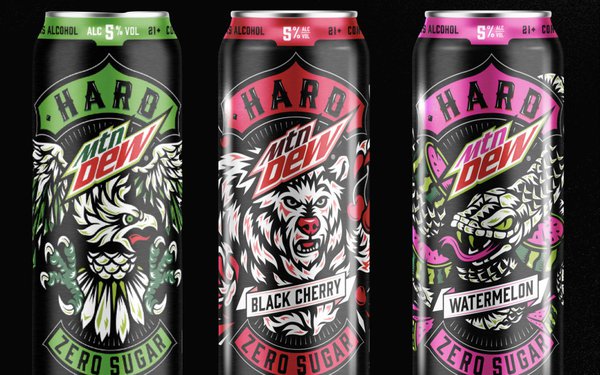 With the future of the hard seltzer category still up for grabs, Mountain Dew will become the first major soft drink to go alcoholic in early 2022 under a partnership between PepsiCo and The Boston Beer Company.

The new brand, Hard Mtn Dew, marks Pepsico’s entry into the hard seltzer wars, although the company also recently filed a trademark request for Rockstar Hard Seltzer, which would extend the energy drinks line it acquired in 2020.

Boston Beer, whose portfolio includes one of the leading hard seltzer brands, Truly, will develop and produce Hard Mtn Dew, with PepsiCo setting up a new entity to sell, deliver, and merchandise the product.

Hard Mtn Dew will be sugar-free and caffeine-free with 5% alcohol, and come in at least three flavors: regular, black cherry and watermelon.

Amid conflicting reports on whether or not the hard seltzer craze is simply a fad or will be longer-lasting, convenience retailer data platform Skupos reported per-store revenues in the category down 25% for June vs. the same month in 2020.

“We anticipate rapid adoption [of Hard Mtn Dew] by retailers, with potential to ride the brand name to consumer uptake," Jake Bolling, Skupos co-founder and CEO, told Marketing Daily. “With the explosive growth that the category saw in 2020 drop off in 2021, this is exactly the type of thing that brands need to do in order to sustain growth and keep consumers interested.”

“Topo Chico leveraged a recognizable brand name, and with the strength of Coke's bottling network, was able to successfully launch a product into this category,” Bolling noted. “With a strong brand in Mountain Dew, and Pepsi's distribution capability, it will be interesting to see how [Hard Mtn Dew] performs.

While hard seltzer may be growing at a slower rate than it had previously, it’s still, well… growing.

Meanwhile, as soft drinks move into the alcohol arena, PepsiCo and Boston Beer are likely to come up against another quandary of the hard seltzer business: consumers’ lack of knowledge of exactly what they’re drinking.

Such has certainly been the case as beer brands moved into the category, with less than a third of Americans 21+ knowing the main ingredient of hard seltzer, according to survey results released last month by alcohol ecommerce giant Drizly.

The correct answer, which holds just as true for Hard Mtn Dew: carbonated water with alcohol made from malt or sugar.

“When asked what they'd reach for first this summer, respondents gave RTDs (30%) the slight edge over hard seltzer (29%), speaking to likely confusion between the two segments,” Drizly said, “especially when considering that hard seltzers have outsold RTDs by two-to-one on Drizly so far this year.”

So, as beverage categories continue to blur, anyone care for a Rum and Coke?

Anheuser-Busch’s Cutwater canned cocktail brand already offers a Three Sheets Rum & Cola, but can actual Coke in a canned cocktail -- or a hard seltzer -- be far behind?