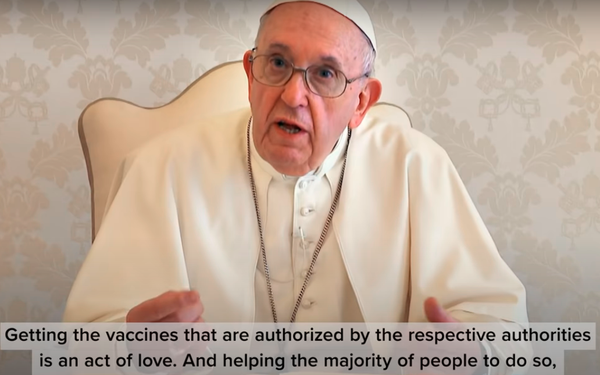 Talk about an influencer!

The Ad Council and COVID Collaborative have tapped Pope Francis as the star of a new PSA designed to increase confidence in COVID-19 vaccines, specifically in Hispanic communities disproportionately affected by the virus across the Americas. Six cardinals and archbishops from North, Central and South America also appear in the PSA.

“To the world's billion-plus Catholics, the Pope is one of the most trusted messengers and holds unparalleled influence,” noted Lisa Sherman, president-CEO of the Ad Council. “We are extremely grateful to him and the cardinals and archbishops for lending their voices and platforms to help people across the globe feel more confident in the vaccines."

"Getting the vaccines that are authorized by the respective authorities is an act of love,’ Pope Francis says in the PSA. “I pray to God that each one of us can make his or her own small gesture of love, no matter how small, love is always grand."

The PSA, in 60-second and three-minute versions and three languages — English, Spanish and Portuguese — is being touted as the Ad Council’s first globally distributed campaign, although the focus is largely in this hemisphere.

The creative, made in cooperation with the Vatican's Dicastery for Integral Human Development, is the latest effort in the Ad Council and COVID Collaborative's “It’s Up to You” COVID-19 Vaccine Education Initiative, which has previously featured an array of celebrities, including former U.S. Presidents Barack Obama, George W. Bush, Bill Clinton and Jimmy Carter.

The Pereira O'Dell agency has developed the overarching “It’s Up to You” creative campaign, with additional assets from Joy Collective, Alma, iHeartMedia, Group SJR, Values Partnerships and others. Production companies Landia and Big Star were also involved with the new PSA.

The campaign will appear via donated media time and space from Facebook, Google/YouTube, Telemundo, Universo, Match Group’s Upward Christian Dating, WarnerMedia, among others.

The Ad Council has also partnered with the Eva Longoria Foundation, The National Hispanic Leadership Agenda, Unidos US, the League of United Latin American Citizens, the Hispanic Federation and the Justice for Migrant Women, for an event that will stream August 25 on YouTube and the Facebook pages of Noticias Telemundo and NBC News Now. It will feature various faith leaders, including Cardinal Peter Turkson, Prefect for the Vatican's Dicastery for Integral Human Development.
ad council, advertising, covid-19, health care
Next story loading