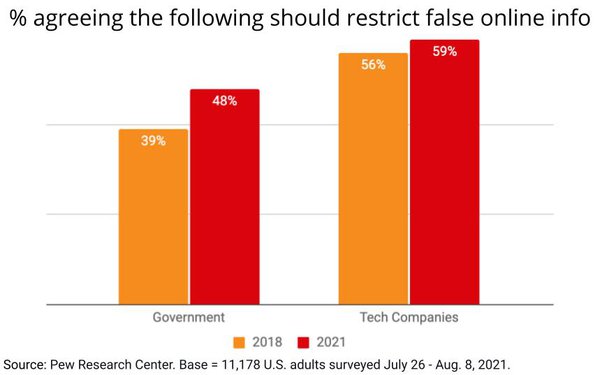 Pew Research Center’s most recent report shows that despite increasing partisan divisions, Americans are increasingly open to the government and technology companies’ restriction of misinformation online.

There was also a decrease –– from 58% to 50% –– in the number of adults who believe freedom of information should be protected, even if misinformation continues to spread.

In 2018, about 60% of Republicans and Democrats (with Independents leaning toward either party) were in agreement that freedom of information should be prioritized over the government’s attempts to restrict misinformation online.

However, over the past three years, partisan divisions have widened.

The new report shows that the amount of Republicans who believe in protecting these freedoms has risen 10%, while Democrats’ views have flipped, with 65% now supporting the government’s involvement in restricting misinformation online.

There has also been a recent divide in partisan views with regard to which steps technology companies should take.

Seventy-six percent of Democrats want tech companies to restrict misinformation, while 61% of Republicans want the freedom of information to be protected.

The study also found that 59% of adults –– compared to 56% in 2018 –– said tech companies should try to restrict misinformation online, even if Americans have less ability to view and post content.

The percentage of adults who believe in protecting freedom of information, whether or not false claims continue to spread online, is 3% less compared to 2018 -- at 39%, vs. 42% in 2018.