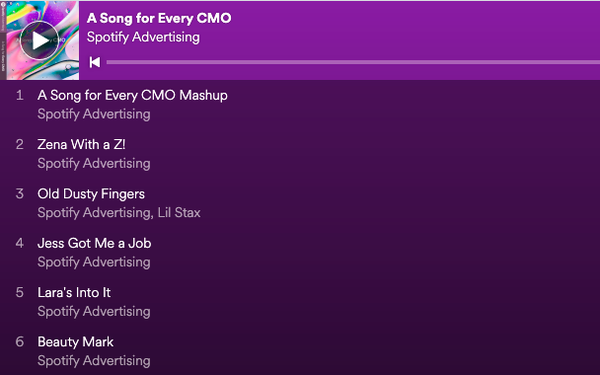 The campaign, "A Song for Every CMO," is designed to generate awareness and goodwill for the audio advertising medium by showcasing creative executions via the "CMO" playlist.

Additional CMO playlists will be dropped in coming months.

“It’s a big miss when we just treat audio as radio," Michael Aimette, Co-Chief Creative Officer of FCB New York, which is Spotify's agency, said in a statement announcing the campaign. "That’s kinda like when TV was invented. Advertisers were slow to recognize that TV is different and what it was capable of, so what happened?  People just made radio ads with pictures. Same thing here. Because there’s still a fairly wide gap between what marketers and advertisers are currently doing with Spotify and what can be done. And as we’re encouraged to be more and more Innovative in the platform, the more the platform can adapt and improve to meet the demand of innovative thinking. They build off each other.”