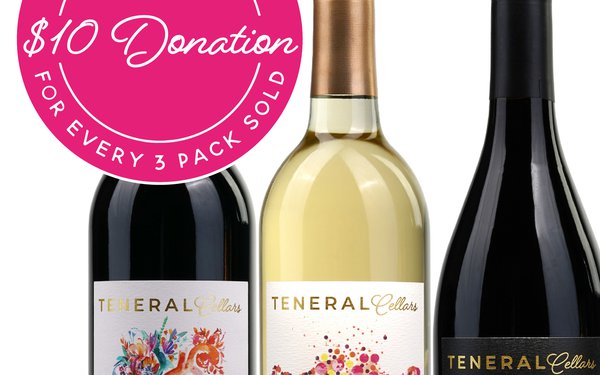 Lakshmi’s contribution comes in her role as co-founder of the Endometriosis Foundation of America (EndoFound), with the nonprofit receiving $10 from every $96 three-pack sold by the winery.

Teneral, touted as “the only 100% women-owned and operated brand that sells strictly online and donates 10% of profits to women's causes,” has committed to quarterly three-packs for specific charitable projects.

Teneral’s wines for EndoFound are:1 in 10 2020 White Wine Blend; 1 in 8 Claret, Bordeaux Red Blend; and 1 in 3 2019 Petite Sirah.Lakshmi has paired them with, respectively, sautéed calamari with checca, braised beef or lamb with tomato and cumin, and BBQ Korean short ribs.

The numbers leading off each wine represent major statistics affecting women’s health, namely the one in 10 women with endometriosis, the one in eight women with breast cancer, and the one in three of those who will be metastatic, along with the one out of every three women who die of cardiovascular disease annually.

“We are addressing the tough and necessary conversations needed to elevate women and inspire change, and using wine as a conduit for that change," said Jill Osur, founder of Teneral, whose name is defined by the company as meaning “the act of claiming your power within to transform the world with grit and grace.”

While perhaps unusual in its female empowerment focus, Teneral, based In California’s El Dorado region, isn’t the only wine brand dedicated to giving back to the community, nor the only one with celebrity connections.

Prominent in the field is 14-year-old Onehope, which two weeks ago unveiled a Napa Valley winery that’s open only to members of its 20/20 Collective, a “handpicked” group of “athletes and musicians, families and philanthropists, wine collectors and world-renowned doctors and scientists” who spend from $2,500 to $10,000 each to receive dozens of bottles of wine and other perks annually.

Aaron Rodgers, the Green Bay Packers quarterback, State Farm commercial star and recent “Jeopardy” guest host, is one of those members.  He called the Collective “a community and experience that rivals the best social clubs and wineries I've been to, with the added benefit of helping to change people's lives.”

Onehope’s website says that it has teamed up with charity: water to fund clean water wells in Ethiopia and Malawi for every 100 new 20/20 Collective members. Its goal is 20 wells (or 2,000 members), and so far two have been funded.