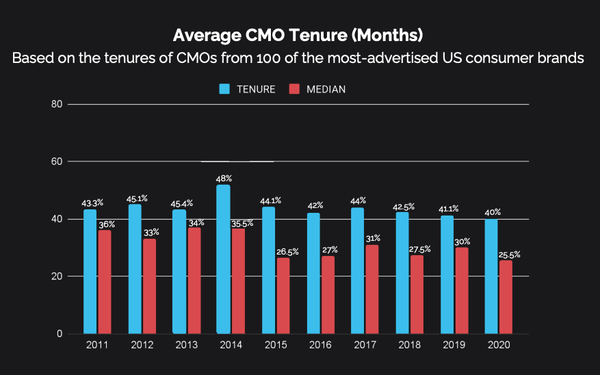 The revolving door for CMOs is spinning as fast as it has in over a decade, according to new research.

The data suggests that 86% of chef executive officers believe the top marketers have the power to influence key decisions of the C-suite, yet less than a third actually trust their CMOs to grow the business, according to the agency Boathouse, which partnered with GLG for the report.

More than 150 CEOs of the largest companies in the United States across 13 industries, including healthcare, technology, real estate and education, were surveyed.

The report explores why, despite the power CMOs have in their position, their tenure problem is self-inflicted, according to CEO respondents.

More than 70% of CEOs believe their CMO would save themselves before taking a bullet for the team. More than half (56%) of survey respondents believe the CMO is more committed to themselves and personal gains versus the CEO/board.

Only 34% of CEOs have great confidence in their CMOs, and only 32% trust them overall. More than half of CEOs (58%) believe a key issue with CMOs' short tenure is their lack of general business communication skills and use of too much marketing jargon.

Only 4% of CEOs surveyed say the CMO is the most trusted member of the leadership team.

Notably, 80% of CEOs believe CMO turnover is happening because those marketing leaders are failing. More than a third (38%) believe that CMOs have the wrong skillsets for a changing environment.

None of the leading organizations in the industry, such as the American Marketing Association, have studied the CMO tenure problem and there is nothing on conference agendas addressing the topic, according to the report.