Consumers in the U.S. and Canada are now spending an average of $112.10 per month on pay-TV bundles (including internet service), and $31.80 per month on subscription video-on-demand/SVOD, according to TiVo’s Video Trends Report Q2 2021.

For most people, those are significant amounts.

In fact, the survey of 4,500 North Americans ages 18 or older found 55% saying that they’re spending too much for video entertainment.

That makes cost the third most-cited video pain point, after the difficulty of finding good shows and movies to watch (60%) and figuring out which service has everything they want (59%).

So it’s hardly surprising that consumers who watch free content continue to express the most tolerance for ads being part of the TV viewing experience.

Perhaps even more notable: Among those who pay for SVOD services or transactional video-on-demand/TVOD, 38% and 42%, respectively, say they don’t mind ads while watching TV. 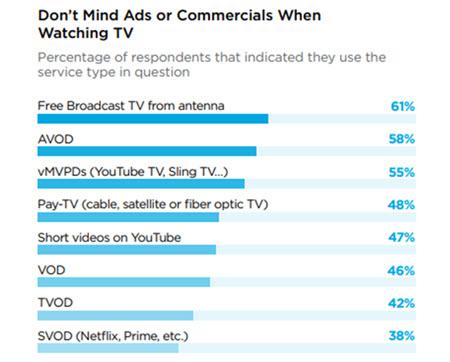 Still, even if we build in some leeway, it seems a positive indicator for advertisers that roughly 40% to 55% of consumers who pay for video/TV content are OK with ads during TV viewing.

Screen and device type may play a role in consumer attitudes about ads: 31% say that ads on a smartphone or tablet are worse than ads on a TV, and 23% say that TV ads are worse—although 38% say they’re the same.

“For those with cost concerns — the vast majority of consumers — free, ad-supported video services are increasingly seen as solid alternatives — allowing them to access content without adding to their total entertainment bill,” sums up the report.

While not actual market share percentages, the survey results also seem to indicate that the race among AVOD services is fairly neck-and-neck.

Asked which AVODs they watch (excluding YouTube), Facebook Watch was cited by the largest percentage of these respondents: 18%.

But the Roku Channel, Peacock (which came in third after little more than a year in operation) and Tubi TV are just one to two percentage points behind. And Pluto TV, Crackle and iMDb TV also follow closely. 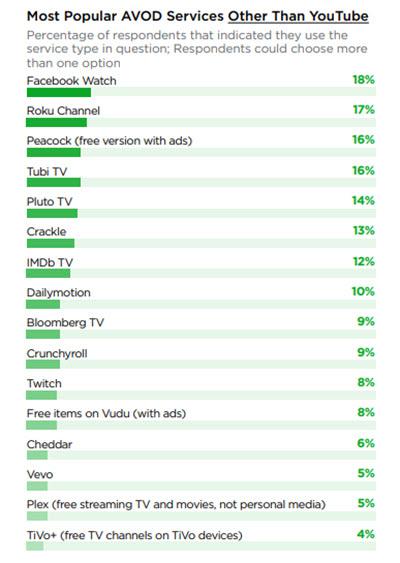