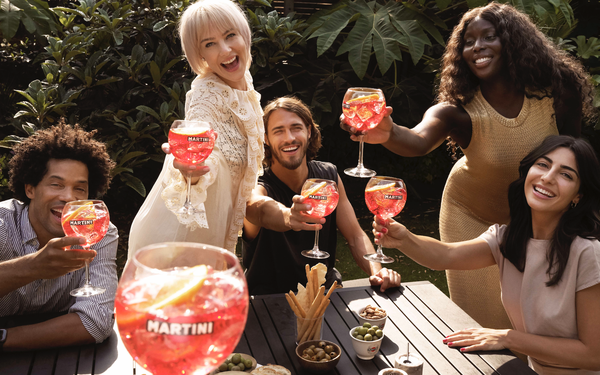 Italian winemaker Martini & Rossi has teamed with celebrity photographer Greg Williams for an Instagram photo gallery celebrating friends getting back together.

The project launched Labor Day with 15 photos from a shoot done this summer at a birthday party for Williams’ wife, model Eliza Cummings (blonde in above image). Little food is in evidence, but there’s lots of Martini’s Fiero vermouth, a bright-orange blend of white wines and botanicals that launched in February.

Victoria Morris, global vice president of Martini & Rossi, tells Marketing Daily that the campaign is not targeting a demo, but a “mindset” that’s “happy and upbeat, highly social and love to spend time with those closest to them.”

She also notes that such cocktails as Fiero Spritz and Fiero & Tonic appeal particularly to the demand for aperitif-style drinks among Gen Z /and Millennial drinkers.

Martini & Rossi is also publishing a Williams-created smartphone photography guide, part of an effort to get consumers to share their own reunion photos with the photo gallery by using @martini and the hashtag #MartiniMoments.

Through Oct. 22, participants will also be entered into a photo competition, with four winners to receive Leica Q2 professional cameras (which cost a cool $5,000 each) and a photoshoot of themselves by Williams (done remotely through an app called CLOS, which allows the photographer to take control of each winner’s smartphone camera).

Although not specified as the prize camera, Williams did team up with James Bond actor Daniel Craig for a limited-edition Leica Q2 earlier this year. Prior to the Leica Q2 Daniel Craig x Greg Williams, the photographer had shot four poster campaigns for the Bond franchise.

Martini & Rossi’s Morris noted that shared drinking, such as shown in the Williams photos, is part of the Gen Z / Millennial trend toward mindful drinking --  “drinking less, but better”--  with lower-alcohol drinks and premium/craft cocktails. Premium vermouth volume, she added, is up by 73% since the pandemic began.

Martini & Rossi this summer has also been running a Fiero Friday campaign, promoting the Fiero & Tonic through online recipe and food pairing ideas, influencer partnerships, and weekly activations at such bars as Surf Lodge in New York’s Hamptons.