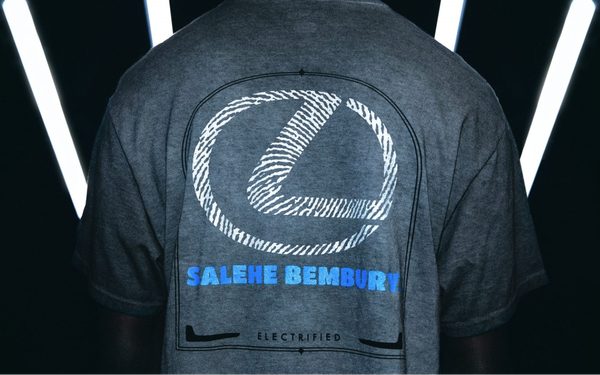 The line, which features Bembury's signature nature-inspired design ethos, is “driven by a shared dedication to pushing the boundaries of design and creativity,” according to the luxury automaker.

The project is a continued partnership between Lexus and Bembury, who designed a rendering of the LZ-F Electrified concept vehicle interior as part of the Virtual Interiors Program in April.

For the clothing designs, Bembury, who is normally a footwear designer, says he approached Lexus' push toward electrification through his own lens.

The 2022 Lexus NX, which was designed and engineered with the “future of luxury” in mind, served as his inspiration.

The collection includes three unisex items: a hoodie, T-shirt and hat. Bembury, who has 317,000 Instagram followers, posted the hoodie design there.

The designs merge recognizable elements of Bembury's body of work, such as his logo and signature fingerprint, with graphic elements including a “reimagined” Lexus logo.

Archway shapes on the front and back were used to tie the design elements together. Graphic accents on the back frame the word "electrified" and were based on the Lexus NX's taillights.

Details that amplify the collection's narrative include the incorporation of reflective ink, which represents the idea of electrification and is used on both the T-shirt and hoodie.

Colors are drawn from the Lexus NX exterior options and the incorporation of a hand-finished, wash tag appliqué in both English and Japanese at the front hem ties together all the brands working on the project.

The unisex apparel pieces range in price from $50-$150 and is available for purchase exclusively at HBX.com.