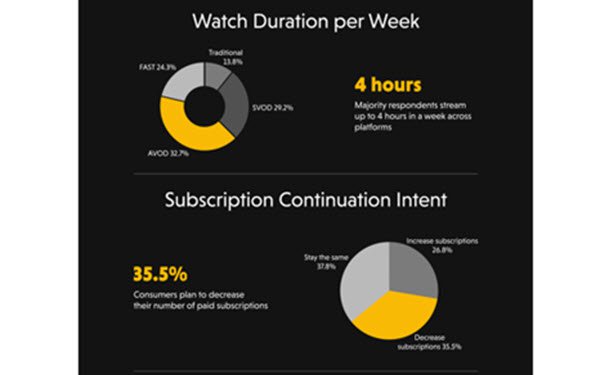 More than half (50.6%) of U.S. consumers say they prefer using use ad-supported video-on-demand (AVOD) services to reduce or eliminate video subscription fees, according to a survey on streaming preferences and viewer behavior by Future Today, which operates several AVOD platforms, and Variety Intelligence Platform.

A “statistically relevant” sample of more than 1,000 consumers across the U.S. was conducted June 15-30.

While roughly half describe streaming ads and traditional TV ads as “about the same,” on average, ads served while streaming were about twice as likely to be considered more relevant to viewers’ interests than those seen on cable or broadcast TV --and more than four times as likely among viewers ages 18-29.

However, respondents also confirmed frustrations with some streamed advertising experiences. The top three are showing the same ad multiple times during an ad break (40.2%), too much advertising per hour of programming (39.3%), and interruptions caused by advertising (33.3%).

More than two-thirds (67.9%) say they prefer selecting programs from an on-demand menu over linear TV's pre-selected programs. That preference is particularly pronounced among those ages 30-44 and those over 60.

While 37.8% plan to retain their current number of streaming subscriptions over the next six to 12 months, nearly the same percentage (35.5%) said they plan to reduce the number, and 26.8% plan to increase it.

Overall, just 13.5% on average reported having stopped using a streaming service in the past year. Users 18 to 29 were found most likely to cancel (19.6%).

More than a quarter (28%) have used one or more free streaming trials in the last 12 months (including 38% of those 18-29). Of those, 41% said they became subscribers when the trials ended.

Most respondents said they stream up to four hours per week across platforms, with AVOD accounting for 32.7% of that weekly time, subscription-based video-on-demand (SVOD) for 29.2%, free ad-supported streaming TV (FAST) for 24.3%, and traditional TV for 13.8%.

Here are the weekly averages for each type of platform:

Half (49.5%) say it's important for a streaming service to tailor content and recommendations based on past viewing history and interests, while 28.3% prefer not to have services personalized.

Younger viewers are much more interested in tailored recommendations (62% prefer), while just 37.6% of those over 60 express that preference.