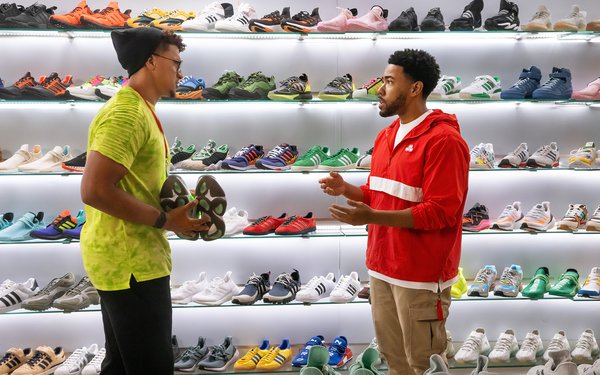 The two, who who began working with State Farm in 2019, last appeared in “Drake from State Farm” the 30-second spot that ran during Super Bowl Sunday earlier this year. It featured Jake getting his first stand-in, none other than Drake, the popular Grammy-award-winning musician. Paul Rudd also made an appearance as the stand-in actor for Rodgers.

Last year State Farm introduced the concept that the company has surprisingly great rates. This year, the quarterbacks get creative and set out to prove that State Farm’s rates can fit any budget.

“Sneaker Head” features Jake finding Mahomes disguised as a sales associate in a sportswear store. When Jake tells him State Farm has rates that fit any budget, even a sneakerhead's, Mahomes is taken aback and says the shoes Jake wants are sold out. The shoes Jake wants are Mahomes’ new design, created in collaboration with Adidas.

The first “Jake” spot appeared in 2011 and featured one of the insurance company’s actual call-center employees sitting in an office cubicle taking a call the middle of the night from a potential customer asking about insurance.

The caller’s wife hears the call and assumes her husband is talking to someone more illicit. “What are you wearing, ‘Jake From State Farm?”” she asks sarcastically. “Uhh…khakis, responds the unassuming and slightly nerdy employee.

The current Jake character, played by a young Black man, was created in 2020 when the company decided to “re-envision how the brand will present itself going forward.”