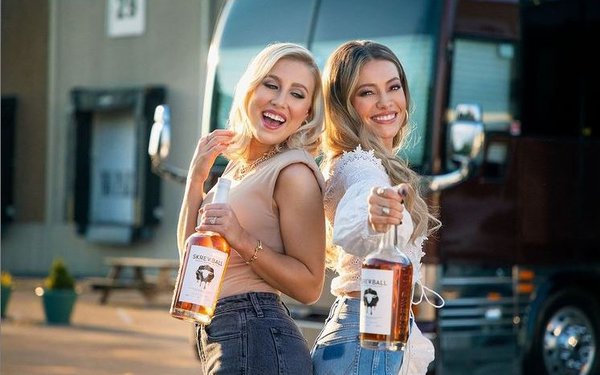 If the very idea of peanut butter whiskey seems, well, a bit screwball to you, take note that Skrewball Peanut Butter Whiskey has recently become the official whiskey of the NFL’s Buffalo Bills, gotten an annual NASCAR race named after itself -- and launched a year-long partnership with country stars Maddie & Tae (“Woman You Got”).

As the Bills’ official whiskey sponsor for the next three years, Skrewball will have signage in Highmark Stadium and also branded bars inside the stadium’s Pepsi Club and Toyota Club that will serve special Peanut Butter Whiskey cocktails. The sponsorship also includes retail and on-premise activities in upstate New York and Southern Ontario.

Also in New York, NASCAR’s  Skrewball Peanut Butter Whiskey 200 was held last month in Watkins Glen. “The opportunity presented itself very quickly, and with the support of our distributor partner in New York State, we were both able to pivot very quickly and take advantage,” Carl Carlson, president of Skrewball, told Marketing Daily.

The Maddie & Tae partnership is so far highlighted by an “Ultimate Nashville Getaway Weekend” sweepstakes, running through Nov. 30. The winner will receive a two-night trip for four to Nashville, plus admission to a Maddie & Tae concert, a $1,000 American Express gift card, and an autographed guitar by the duo. The total retail value is estimated at up to $4,950.

Who’s behind this surge of branding initiatives?

Skrewball has been distributed nationally by Infinium since May 2019, following its July 2018 launch by San Diego-based married couple Steven and Brittany Merrill Yeng.

Indeed, Carlson says that Skrewball is “the fastest growing super-premium spirit brand in beverage alcohol industry history,” a claim based on annual Impact Databank reports going back to 1988.

Others have taken notice. By the end of 2019, Drinks Market Analysis was reporting that 20 other brands had come out with peanut butter whiskey, but that Skrewball still held 90% of sales volume.

So what exactly is peanut butter whiskey? Just as it sounds, spirits mixed with the foodstuff, which provides an “amazingly thick and rich mouthfeel, even a bit sticky -- just like peanut butter,” according to a review of Skrewball by The WhiskeyFellow. The review also notes "unbelievable" polarization in social media responses to the product:  “Essentially, people either love Skrewball or they have found it disgusting.”