With Uterus-Shaped Vending Machine, The Pill Club Sends A Message 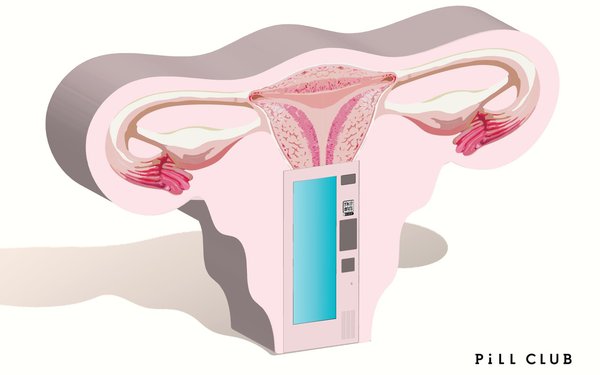 If men could get pregnant, birth control would likely be as easy as buying a vending machine candy bar. So the Pill Club, a D2C company designed to make birth control as convenient as possible, is making the point with a plan to set up a uterus-shaped vending machine at the busy corner of Houston and Lafayette.

The San Francisco-based company says the activation is in keeping with its fresh and feisty personality. But it’s perfectly serious, too. “Women still face unnecessary, outdated barriers to getting birth control, even though 11 million Americans take it every day,” says Liz Meyerdirk, chief executive officer of the telehealth start-up. “So this vending machine is a nod to how easy it should be.”

The event, tied to World Contraception Day, is also a way to acquaint passers-by with what gives the brand such appeal to its Gen Z audience. Besides birth control, the machine is stocked with condoms and individual packets of lubricant, the affirming stickers it’s known for tucking inside every care package it mails, and period-care products.

There’s even a phone case that doubles as a holder for BC pills.

Meyerdirk says the activation gets to the Pill Club’s brand essence: The credibility of quality healthcare, plus surprise and delight. “Our customers love that our monthly care packages include surprises,” she says, which might range from chocolate to a clay mask to a trial size of Midol. “These digital natives love that we have a bit of an edge.”

Earlier this year, the company introduced a handful of emojis to help make tampons, uteri and birth control part of Gen Z’s preferred vernacular. “We want people to talk more about all these topics,” Meyerdirk says. “They shouldn’t be taboo.”

Meyerdirk, a founding member of Uber Eats, joined the company earlier this year and says she doesn’t view rival companies, such as Nurx and Hers, as competition. “We’re all trying to serve women better. And right now, many don’t have a sense of security with healthcare­. It’s all so transactional.”

As consumers become more “fluent in the on-demand economy,” she believes that more healthcare opportunities will arise. One growth area is skincare. “About 40% of women on hormonal birth control make that choice because of acne,” she says, “so we see some opportunities there and are selling products to help.”

The bottom line, she tells Marketing Daily, is that people are busy. And the more people get used to the ease and convenience of telehealth, the more they’ll use it -- just like groceries online or having takeout delivered.

“Right now, most people think they need to get birth control via an annual visit to a healthcare provider and a trip to the pharmacy each month. That’s 13 trips you have to make a year. Wouldn’t you rather have it mailed to your home? People want to avoid all those various logistics.”

Consumers also tend to resist online birth control because they assume that anything easier and more convenient must also be more expensive. “Many women think services like this are for wealthy people,” she says. “But thanks to the ACA, all insurance has to cover birth control. Once people realize that, it’s easier.”

Education is also a core part of Pill Club’s services, answering questions about everything from weight gain to efficacy rates. It’s donating $20,000 to Bedsider, a nonprofit that focuses solely on teaching people about all types of birth control.

Pill Club is fierce in its commitment to treating birth control as a healthcare choice, not a political football.

It recently joined 49 other companies that signed the “Don’t Ban Equality” pledge, objecting to Texas’ recent passage of its restrictive abortion ban.

“Everyone should have access to the medical care they need, on their terms,” the Pill Club tweeted. “That means no bans, no bounties, and no politicizing healthcare.”