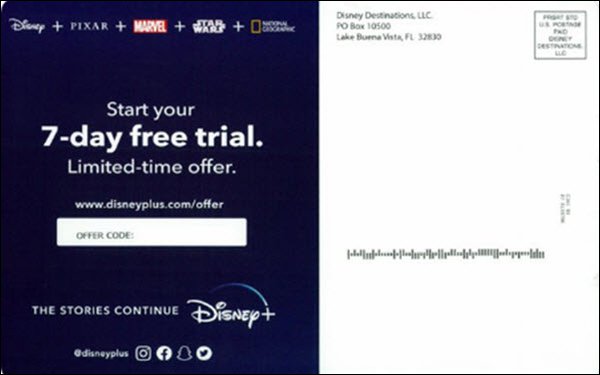 After dropping its 7-day free trial offer in June 2020 — seven months after its November 2019 launch — Disney+ is again promoting that offer, via a direct-mail piece.

The promotion was spotted by Emily Groch, director of insights and telecom competitive marketing at Comperemedia, which tracks direct mail campaigns.

Groch tweeted that the Disney+ direct mail piece (above), which drives recipients to use a code provided to respond to the offer via an area on the Disney+ site, was sent to an estimated 500,000 U.S. households.

Disney+ discontinued the free-trial offer amid robust subscriber growth, shortly before the debut of its movie version of “Hamilton” on the streamer.

Taking a free trial to watch a specific movie or series, then canceling, is a common practice.

Disney+’s long run of big leaps in paid subscribers has slowed of late, particularly in the U.S.

This week, Disney CEO Bob Chapek warned during an industry conference that Disney+ “hit some headwinds” in its current fiscal fourth quarter, and is expected to see subscriber gains in the “low single-digit millions.” Some analysts had been projecting growth in excess of 10 million.

Chapek attributed the slowed growth to issues including a delay in Disney’s new Star+ streaming service, challenges with partnerships in Latin America, and pandemic-driven delays in content production and a suspension of key sports coverage asset the India Premier League.

Disney has been projecting that Disney+ will reach 230 million to 260 million global subscribers by 2024.

The price for the Disney bundle that also includes ESPN+ and Hulu was also raised by $1, to $13.99.

After publication, a Disney spokesperson reached out to Digital News Daily to say that Disney "continues to test and evaluate different marketing, offers, and promotions to grow Disney+ – this includes occasional free trial promotions. This specific one was a limited promotional offer that went out in early August and ended earlier this month."