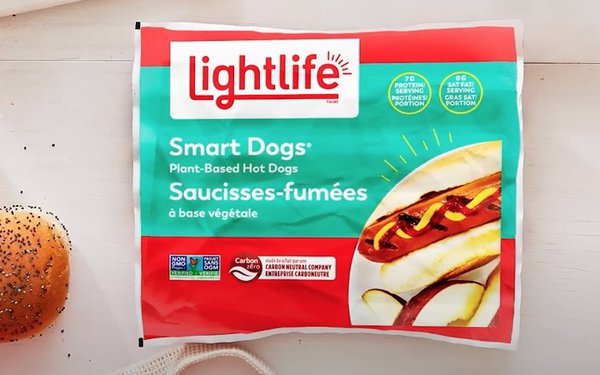 Actress and rapper Awkwafina is heard but not seen in the latest campaign for Lightlife plant-based foods.

“Simple Ingredients For A Full Life” debuts following a year-long overhaul of Lightlife’s product ingredients to create what it calls “the cleanest vegan portfolio” in the plant-based category.

Campaign creative in what the 42-year-old company says is one of its largest-ever media investments intersperses nature scenes with Awkwafina’s narration of a “clean, simple, delicious” theme.

In this 30-second spot, she says “People usually don’t want to know what’s actually in a hot dog. Well, here’s what’s in ours. Plants. No GMO’s, no synthetic ingredients, no artificial anything.”

According to a Lightlife rep, the brand’s ingredient overhaul includes removing the thickener/preservative carrageenan from its Smart Dogs, eggs from its Smart Sausages and such “unnecessary” substances as the vegetable-starch derivative maltodextrin.

The latest campaign differs dramatically from the approach Lightlife took a year ago. Running ads in major national and regional newspapers, the company called out “food tech” competitors Beyond Meat and Impossible Foods.

“Lightlife’s goal was to spark a conversation in the industry and among consumers,” the rep tells Marketing Daily.

Asked why plant-based foods have yet to gain a strong foothold as regular menu items at QSR chains, the rep adds, “The pandemic has changed consumers’ expectations for dining out. It’s critical that operators diversify their protein options beyond traditional meat and consider options that travel well—including sandwiches, bowls and burritos.”