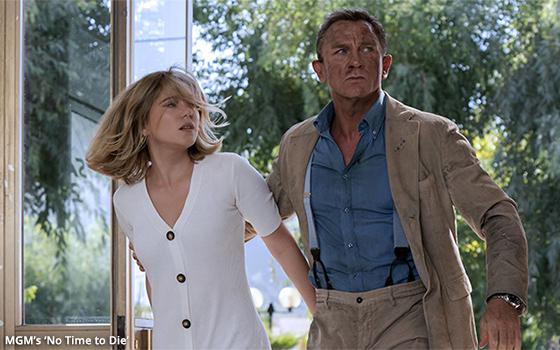 Amid the largest-ever number of theaters for the James Bond franchise’s latest debut -- amid massive amounts of national TV advertising -- MGM’s “No Time To Die” underwhelmed in its U.S. opening weekend, at $56 million.

The film debuted in 4,407 theaters and movie-theater analysts were projecting near or above a $100 million-plus opening -- which would have been the biggest opening weekend for a movie since the pandemic began in mid-March 2020.

In the crucial two-week period before the movie’s opening, MGM spent an estimated $9 million in national TV advertising -- with 2,151 airings -- according to iSpot.tv. Overall, the TV research company said the entire movie campaign spent $25 million on national TV for 4,295 airings.

Much of the film’s advertising was on NFL football, Major League Baseball and ESPN’s “SportsCenter.” The movie had a “share of voice” for the two-week period of 22%.

If it secured $100 million in U.S. box-office revenue for its opening weekend, “No Time” would have topped the current pandemic era champ, Sony Pictures’ “Venom: Let There Be Carnage,” which opened last week with a $90 million start.

In its second weekend, “Venom” added to its money pile -- a healthy $32 million, according to Comscore. Another MGM movie, “The Addams Family 2,” was in third place, with $10 million, now totaling $31.1 million.

Disney/Marvel’s “Shang-Chi and The Legend of the Ten Rings,” was next at $4.2 million after six weeks -- now at a U.S. movie box-office revenue total of $212.5 million.

“No Time To Die” had the smallest opening weekend since the 2006 Bond movie “Casino Royale” ($40 million), also starring Daniel Craig. While U.S. box-office results for “No Time” was below expectations, worldwide, the movie posted a healthy $313.3 million, according to Comscore.