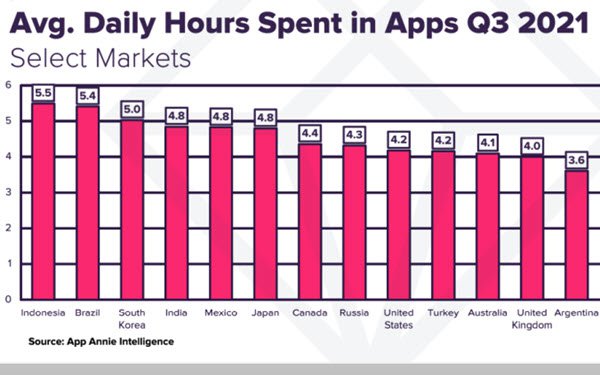 U.S. consumers spent an eye-popping average 4.2 hours per day using mobile apps in Q3 2021— up from 3.9 in Q2, according to the latest time-spent report from App Annie.

Yet, that usage level is overshadowed by the daily averages for several other countries. In total, consumers in five countries now exceed the five-hour-daily level, and those in 12 countries exceed four hours.

Other countries with higher usage rates than the U.S. include India, Mexico, Japan, Canada and Russia. Turkey is on par with the U.S., and Australia and the U.K. are slightly lower.

TikTok was the most-used app across the world — it was the most-downloaded in three countries, including the U.S., and the only app to appear in the top-five lists of all nine countries monitored by App Annie.

(In September, TikTok announced that it had hit 1 billion active users, meaning that one in eight people in the world use it each month.)