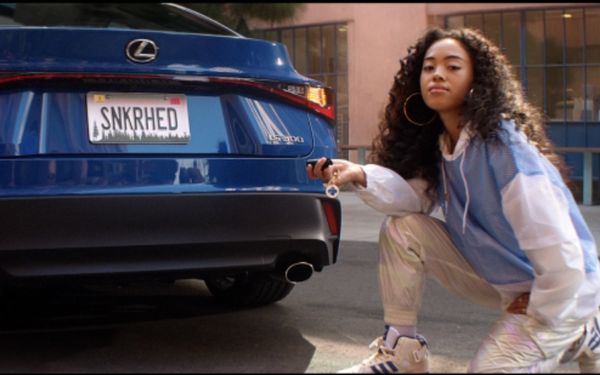 A recent Lexus activation using screens in ride-sharing vehicles is part of the brand’s ongoing initiative to expand its reach and appeal.

The effort this summer was successful in reaching the 18- to 49-year-old “cord cutting” demographic who are heavy rideshare users and extremely difficult to reach through linear TV.

Lexus is specifically targeting consumers ages 18-35 for the Lexus IS sports sedan, says Vinay Shahani, who took over as Lexus vice president of marketing in January.

Lexus wanted to gather consumer insights about the rideshare audience and received over 55,000 in-car responses over the course of four weeks.

An interactive survey on the vehicle screen in the back seat asked riders, “What best describes you?” using the 10 defined Lexus IS cohorts from its creative.

The execution created real-time insights on the psychographic composition of the rideshare consumer for Lexus in its segmentation. The rider’s selection was then reinforced by playing the  Lexus IS “Vanity Plates” ad for users who self -dentified as foodies, techies or fashionistas.

Riders could then scan a QR code in the ad that took them to an augmented reality pilot the brand conducted with Google allowing users to “place” the IS in their garage, in their driveway or anywhere they wanted to.

The effort resulted in high engagement among younger demographics of qualified luxury auto buyers who have an average income of $131,000, per Octopus, and a 78% increase in ad recall in a Nielsen Brand Effect Study.

“We saw amazing engagement,” Shahani says. “The data that we got from Octopus and Uber and Lyft was very relevant. We saw an excellent click-through rate in terms of people that actually went through the entire process. We broke a lot of our benchmarks in terms of engagement [and] the leads that came up.”

“Octopus Inventory is available both directly and programmatically,” Fogel tells Marketing Daily. “While working with us directly allows for more interactive activations, each channel provides access to riders, who are a highly concentrated affluent 18-49 demographic.”

Octopus began working with drivers and installing screens in March 2018 and has since partnered with 15,000 drivers providing incremental income through cash incentives and reported increases in ratings and tips.

Passengers have control over the experience, including the ability to choose games to play, content to experience, and if the tablet is muted or "napped" during their ride.

“Our screens are on 98% of the time for riders to enjoy,” Fogel says.