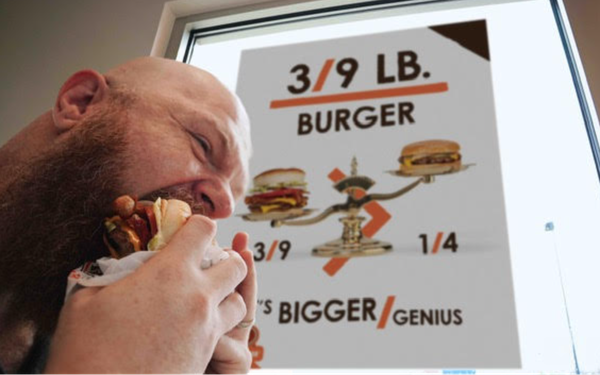 In the 1980s,A&W Restaurants tried to compete with McDonald’s Quarter Pounder by offering a bigger 1/3 pound burger at the same price.

Unfortunately, Americans aren’t so great at math. Confused consumers wrongly assumed that 1/4 was bigger than 1/3 (because 4 is bigger than 3) and the whole experiment went down in history as a huge marketing fail.

Now the brand is back with an attempt to clarify the math issue via a paid campaign on Facebook and Instagram.

The 60-second spot from Cornett rebrands the bigger burger as the 3/9-pound burger. Since nine is bigger than 4, the aim is for math-challenged Americans to “get it” this time.

Stories about the brand’s issues with communicating its bigger burger size have circulated for years, says Liz Bazner, director of marketing at A&W, which has 525 U.S. locations

“Every few months it seems to gain momentum and reappear on social media,” Banner says in a release. “We’ve received tons of questions about it, but prior to now we haven’t been proactive about setting the record straight.”

The brand is on track to reach its 2021 franchise sales goal of 20 new restaurants by the end of the year. In 2020, A&W posted a 10% comp sales increase for the second year in a row.