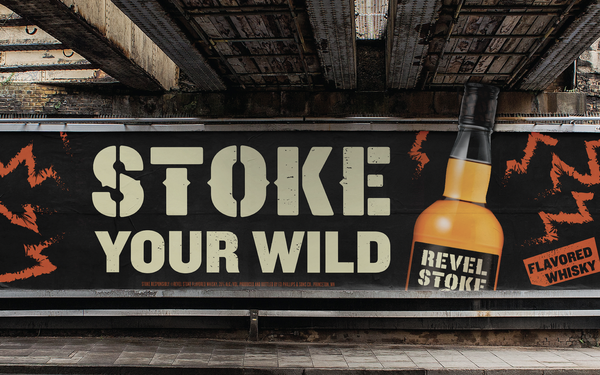 Repackaging and repositioning its line of Revel Stoke flavored whiskeys, Phillips Distilling Company has launched “Stoke Your Wild,” the largest integrated marketing campaign in its 109-year history. The target audience: male “zillennials,” 21- to 34-year-olds “who embrace the freedom to pursue what matters most to them.”

The national campaign is using a mix of social media, influencer partnerships, streaming audio, ecommerce and delivery app promotions, and "text to save" offers via PayPal and Venmo. In three states -- Minnesota, Wisconsin and Iowa -- out-of-home billboards are also going up.

The billboards are from Chicago’s Billups, the social media from Minneapolis’ space150, and the package redesign by Minneapolis’ Cue.

"Flavored whiskey as a category is growing exponentially,” stated Peter Olson, Phillips’ senior brand manager - Brown Spirits in the company's announcement.  "Over time, whiskey has gotten too serious and boring….Whiskey should be about outrageously good times.”

Phillips, which claims to have introduced flavored whiskey in the 1990s, prides itself as a spirits industry pioneer, with other innovations including schnapps in the 1930s and flavored vodka in the 1950s.

Just this month, Phillips began test marketing Cubist Freezer Vodka in Minnesota and Arizona. Said to be the only vodka “specifically designed and distilled from start-to-finish to store in the freezer,” its bottle features a label developed in conjunction with thermochromic ink technology firm CTI that turns blue when the vodka is at or below zero degrees Celesius (32 degrees Farenheit).

Cubist Freezer Vodka’s target audience is 26- to 45-year-olds, both male and female “who like to experiment with new vodka brands.”

Last month, Phillips also worked with CTI on a repackaging of its UV Vodka in conjunction with a new tagline “Bring The Light.” In this case, the label changes from a black logo to colorful waves when the bottle is exposed to UV (in this case, meaning ultraviolet) sunlight rays.

In July, the latter brand launched its own Space150-created campaign, “Prairie Spirit,” targeting “Ecopolitans” -- defined as “a 30-something urban dweller, who is socially connected and cares deeply about the environment and is looking to uncover new ways to preserve the planet” -- with out-of-home billboards, :15 and :06 spots on YouTubeand connected TV; paid social on Facebook, Instagram and Pinteres; and "text to save" offers via PayPal and Venmo.