You Can't Take It With You: Apple Now Lets Survivors Access A Departed Loved One's Data 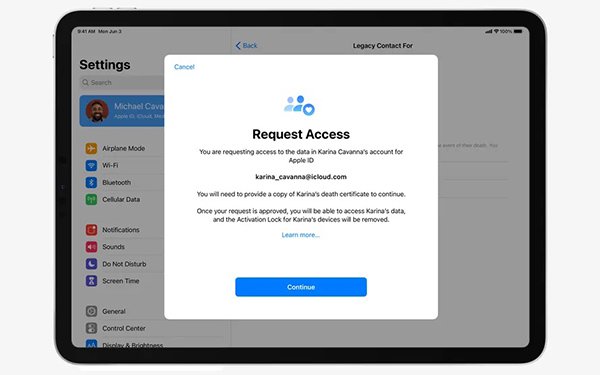 Apple is rolling out a program that it says will enable families and friends to access the online data — of the dead.

“We don’t often think about it, but its important to that we can easily pass that information to family or friends when we pass away” said Mike Abbott, vice president Apple Cloud Services, in a video during this year’s WWDC conference in June.

How would this work? People would list up to five Legacy Contacts who have advance permission to see the data stored in iCloud, whatever it is.

“When you’re gone, they can simply request access, and your information can be passed along quickly and easily,” Abbott said.

Of course, it is not quite as simple as that.

“To activate Digital Legacy, Apple still requires proof of death and an access key,” writes the Verge, which covered this story on Wednesday.

Previously, families sometimes had to go to court to access a person’s digital remains. Often, they needed “a court order confirming a right to inheritance, and even then, there was no guarantee you would get access to the data,” the Verge notes.

Newly bereaved families may lack the focus and the passwords needed to take down social media accounts or access their loved one’s information.

That challenge was at the center of a decade-long legal dispute. John Ajemian was killed in an accident in 2006 at age 43, and his family was denied access to his Yahoo email account because, not expecting to die young, Ajemian had neglected to make a provision in his will.

A Massachusetts court ruled that SCA did not apply here, and in 2018 the U.S. Supreme Court declined to hear Yahoo’s appeal. This did not mean Yahoo had to turn over the email account. But it did provide a measure of closure.