Study: When It Comes To News, Twitter Is A Mixed Bag 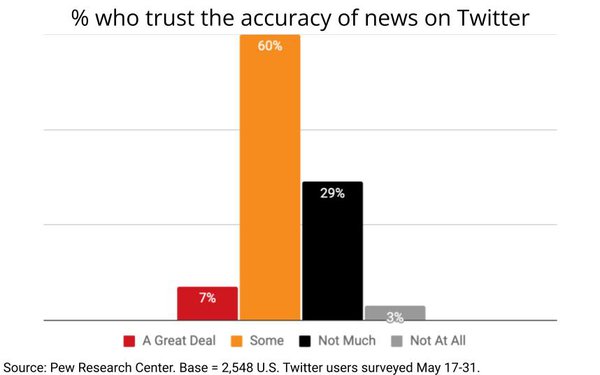 More than two-thirds (69%) of Americans who use Twitter say they use it to access news, but just 8% characterize it as the "most important way they get news," according to findings of one of two new reports from the Pew Research Center analyzing the impact Twitter has on the news consumption of Americans.

The reports, which are based on a survey of 2,584 U.S. adult Twitter users conducted May 17-31, also found that when it comes to their understanding of new events, Twitter is a mixed bag, at best.

While 46% said the site increased their understanding of current events in the past year, 33% reported seeing "a lot of misleading or inaccurate information," and 53% characterized inaccurate or misleading information is "a major problem on the site."

The analysis of general Twitter users offers some key takeaways with regard to behaviors based on privacy, political affiliations, on-platform abuse, and more.

At least 53% of users say they have public profiles visible to anyone, despite reporting private profiles or confusion over privacy settings. However, examination of the users who provided Pew with a unique Twitter handle reveals a much higher number –– 89% –– of profiles set to "public."

In terms of political affiliation, Democrats and Republicans, not surprisingly, report differing views on the site's major issues and overall impact on democracy.

While an almost equal number of users believe the site is mostly good (37%) and mostly bad (38%) for American democracy, Republican users are twice as likely (60%) as Democrats (28%) to say the site has a negative impact.

Republican users are also far more likely (59%) than Democrats (17%) to report that Twitter's limits on reach or visibility of certain posts is a major problem.

The issue of banning users received a similar response, with 61% of Republicans to 6% Democrats citing it as a major problem.

One area that did not show variance between political identification, age, gender, or educational attainment is reports of harassment and misinformation. Seventeen percent of users say they have experienced personal harassment or abuse on Twitter, while 33% say they witness “a lot of inaccurate or misleading information.” Around half of all users believe misinformation (53%) and harassment (47%) are major problems on the site.

An analysis of tweets by the group who provided real Twitter handles found that the top 25% of active tweeters produced 97% of all tweets from American adults between June 12 and September 12, 2021.

While a small share of highly active users are producing the vast majority of content on the platform, the new reports show that high-volume tweeters produce few original tweets and receive little engagement from the broader Twitter audience.

In the June-September survey window, the Center found that from that 97% of tweets from the top quarter of users, only 14% were original posts, while 49% were retweets and 33% were replies to other users.

The new reports also highlight key behaviors in these high-volume tweeters that set them aside from less prolific users. For example, 1 in 5 visits the site too many times to count on a typical day. Their Twitter use also often involves a heightened political edge, as they are more likely to say Twitter has increased their political engagement over the past year.

In addition, high-volume users are twice as likely (24%) to report personal harassment or abuse on the platform compared to less active tweeters (11%). But they are also less likely to view the overall tone of discussions on Twitter as a major issue (27% compared to 42%).

Findings from the Pew Center's reports on Twitter news consumers focus on political party differences and the way the platform has impacted users' lives.

Democrats who receive their news on Twitter offer more positive assessments of that news than their Republican counterparts. Seventy-four percent of Democrats have some degree of trust in the accuracy of news and information they find on the platform, compared to 52% of Republicans.

Twitter news consumers are likely to be younger, Democrat, and be college graduates than other Twitter users.

One key question is how Twitter has impacted their news consumption. Fifty-seven percent say the site has increased their understanding of current events (compared to 23% of other Twitter users), and are more likely to report a greater level of political engagement because of Twitter.

Thirty-one percent of Twitter news consumers, however, report increased stress levels compared to 14% of other users.

These findings illuminate a similar trend from the Center's 2019 Sizing Up Twitter Users report, which showed that American adult Twitter users rarely tweeted. Instead, the most prolific 10% of users created 80% of tweets in the adult demographic. 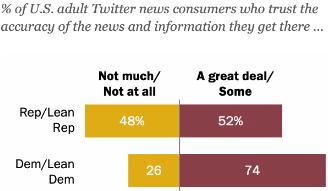