The Streaming Dynamics Shift Is Here... Lessons From Crackle And 'Ted Lasso' 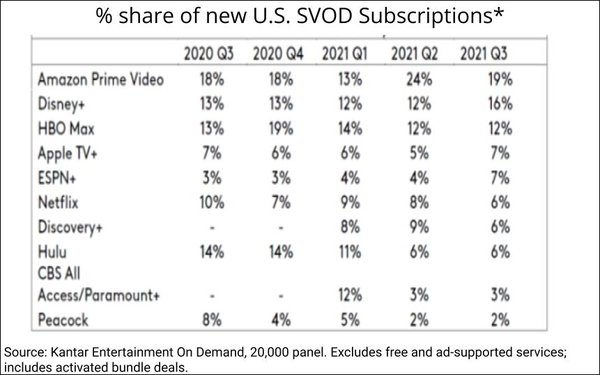 Although the coronavirus pandemic is far from over* (thanks to the politicization of life-saving vaccinations), we’re starting to see which behavioral trends are sticking or dwindling as public activities resume.

Given the huge levels of investment in streaming and its future, the media and advertising industries have been particularly anxious to see how the pandemic-induced explosion in this sector would hold up in more “normal” times.

Now, although the scenario is still playing out, we’re starting to get some answers.

In July, I reported that the U.S. ad-free, streaming video-on-demand (SVOD) market appeared to hit an inflection point in this year’s second quarter, based on a quarterly survey of 20,000 U.S. digital entertainment services subscribers by Kantar’s Entertainment on Demand (EOD).

Specifically, the growth rate for households signing up for new SVOD subs dropped to 3.9% in Q2 2021, from 12.9% in the year-ago second quarter — the lowest rate seen since the EOD service launched in Q1 2020.

And most of the big SVODs tracked saw their shares of new subs decline.

Now we have EOD’s Q3 results, and can see that not only did those trends accelerate, but ad-supported streaming alternatives advanced.

While 82% of households still have at least one SVOD, that penetration declined by 1.5 percentage points versus Q2, also driving a quarter-over-quarter 1 percentage-point decline in the number who have a video subscription of any kind, to 85%.

There are numerous trends of note within this quarter’s survey data, including this: Overall, 4.5 million consumers cancelled subscriptions in Q3 (including those who had multiple subscriptions and remain in the streaming category) — but 85% of those who cancelled were viewers who had only one subscription in Q2 2021 (and now have zero).

But EOD zeroed in on Apple TV+ and Crackle, for good reason. They point up content’s important, albeit differing, roles in success for both paid and nonpaid services.

Apple TV+’s “Ted Lasso” series provides a dramatic example of how even one breakout content offering can boost key performance indicators — and why major paid streaming services, in particular, are pumping up investment in content more than ever.

“Ted Lasso” ranked as both the most enjoyed and most recommended content in Q3. While there was minimal impact on net household penetration and share of streamers, according to EOD, the series helped drive satisfaction among current subscribers, which could reduce future churn.

Ted Lasso helped drive a large jump in loyalty for Apple TV+  as measured by the Net Promoter Score (NPS) — which rose by 18 points quarter over quarter, bringing it into line with the average NPS across streamers.

In addition, disuse of Apple TV+ dropped by roughly half compared to Q2, and among those who did not watch Apple TV+ in their typical week, those claiming it is because they have too many subscriptions declined by 35%.

“This indicates that for even irregular viewers of Apple TV+, the platform gained share of screen time from other platforms,” notes EOD. “If Apple TV+ can keep subscribers engaged post ‘Ted Lasso,’ this metric is a positive indicator of being able to retain subscribers through Q4 2021.”

A fact undoubtedly not lost on Netflix, which still commands a two-thirds share of all U.S. subscribers, but has been losing share each quarter — including 1.8 points in Q3. In fact, EOD predicts that the popularity of “Squid Games” alone is likely to result in stabilization or growth for Netflix’s penetration in Q4.

Meanwhile, on the free, ad-supported front, EOD finds that ease of use and content discovery are critical for FASTs — and that these are particular strengths for Crackle versus its free competitors.

New Crackle subscribers “were driven by the ease of use (26% of new services) and ease of search (17% of new services) on the platform,” EOD reports, with the former particularly key for  users ages 35-54 and the latter for those 45+.

However, content is not as crucial in driving new subscribers as it is with paid services, it still matters — particularly to younger demos.

“While Crackle made improvements in the last quarter, it still falls behind the likes of Tubi, Pluto and CrunchyRoll,” notes the report. “With an NPS below average, planned cancellation of Crackle in the coming three months is higher than other FAST competitors, currently sitting at 5.3% of current Crackle subscribers.

In short, “Crackle demonstrates that ease of use breaks down the barrier to sign up, but without satisfactory content variety, there will still be barriers to retaining viewers and reducing churn, particularly among younger users.”

Looking forward, EOD points out that, because the “bottom fell out” in terms of the least engaged streaming subscribers dropping out, subscriber retention rates will likely rise in Q4.

But at the same time, given that there will be even more services stacking and competition for screen time, trending content may play an even more important role in which services prevail in Q4 and beyond.

free, research, streaming, svod, television
1 comment about "The Streaming Dynamics Shift Is Here... Lessons From Crackle And 'Ted Lasso'".
Check to receive email when comments are posted.
Next story loading