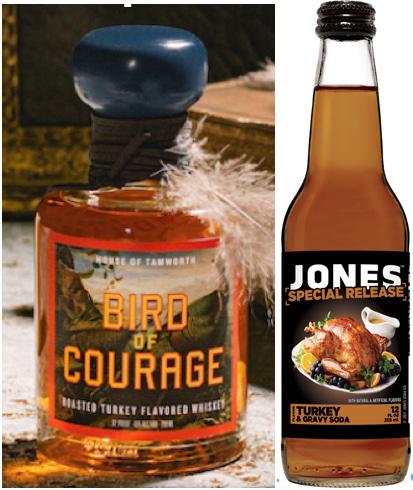 For those who like to drink their Thanksgiving turkey rather than eat it, this is the right year!

New Hampshire’s Tamworth Distilling has just launched a roasted turkey-flavored whiskey, while Jones Soda has revived its Turkey and Gravy flavor after a 10-year absence.

Tamworth, which previously released limited-edition whiskeys made from beaver (Eau de Musc) and venison (The Deerslayer) is selling its new Bird of Courage online at seelbachs.com for $65 per 200 ml bottle, as well as at its distillery in Tamworth, New Hampshire, and at Philadelphia store Art in the Age.

In conjunction with its latest limited edition, Tamworth is also raffling off a dinner for up to 10 people complete with Bird of Courage, to be enjoyed at its distillery or for pickup, with 50% of proceeds benefiting the National Wild Turkey Federation.

Jones’ Turkey & Gravy Soda, whose ingredients are listed as containing "natural flavors,” has been made available in a limited-edition capped at 35,000 individually numbered bottles. It’s already sold out online but is still available at Kroger stores nationwide.

Jones says it brought back the “infamous” flavor to celebrate the 25th anniversary of the offbeat firm.

Jones, which last month named former Starcom global chief experience officer Bohb Blair as its first-ever chief marketing officer, saw its YOY revenue increase 29% in the third quarter to $4.6 million. During the quarter, Jones introduced an augmented reality label, which has just been augmented itself with images of turbaned fortune telling icon Zoltar. The company has also announced plans to launch a line of a cannabis-infused beverages, edibles, vapes and pre-rolls early in 2022.

The Turkey & Gravy flavor was launched originally in 2003, and, by a few years later, Jones was also offering "Green Pea," "Sweet Potato," "Dinner Roll" and "Antacid" flavors for a complete Thanksgiving meal. Those flavors have not been revived.