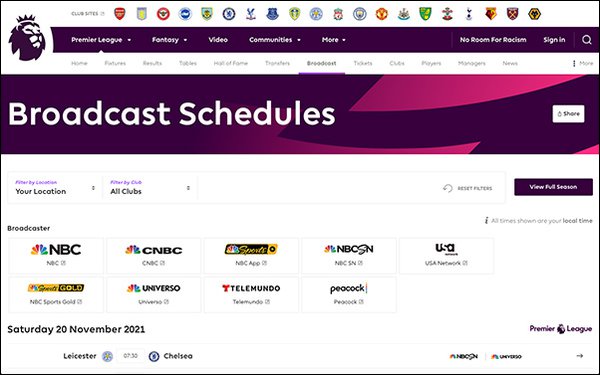 NBCUniversal has retained England’s European football’s Premier League in a major six-year deal for a reported $2.5 billion to $2.7 billion.

NBCU will air 380 games through 2028 on NBC, USA Network, Telemundo, Universo and Peacock, its streaming platform. NBCU beat out Walt Disney’s ESPN and a joint bid from WarnerMedia/Fox Corp.

Much of the existing package had been airing on sports network NBCSN and Telemundo. NBCU is closing down the longtime sports network at the end of 2021.

League games averaged around 780,000 Nielsen-measured viewers on the NBC Television Network and around 390,000 viewers when airing on NBCSN. These viewing results have been fairly stable over the few years.

From all NBCU’s games, shows and content, Premier League collectively earned an estimated $17 million in national advertising revenue from November 2020 to November 2021, according to iSpot.tv.