Automotive TV Spending Down 8.8% In November 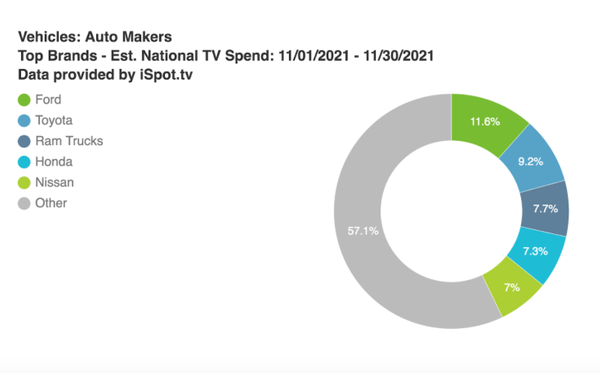 Automakers' estimated TV spending was down 8.8% in November compared to a year ago, while impressions fell 29.4%, per iSpot.tv.

While automakers’ national TV ad spend may be down year-over-year, there’s a deeper story around how some brands just spent more in late 2020 to make up for a lack of live sports earlier in the year, says Stuart Schwartzapfel, SVP, Media Partnerships at iSpot.

“Additionally, some of 2021’s biggest-spending auto brands on a national level are also buying more TV ad impressions in specific local markets as a result of both supply chain issues and vehicle inventory concerns to close the year,” Schwartzapfel tells Marketing Daily.

Over 78% of Ford’s November national TV ad spend was related to football -- NFL games, college football and FOX NFL Sunday, among other related programs, per iSpot. Toyota’s emphasis was even more football-focused, with nearly 90% of the month’s TV ad spend dedicated to NFL and college football games.

Honda increased its investment in national ads during both NFL and college football games, and also Spanish-language programming year-over-year, per iSpot. The same goes for GMC, which more than doubled its national TV ad spend during NFL games compared to last November, while also appearing during NBA games this year (wasn’t an option last year given the pandemic-altered schedule that started the new season in December).

As is usually the case, automakers put ads where they’d find the most eyeballs: NFL games. Automakers also led the way among all NFL advertisers in November 2021, with 8% of impressions during games during the month, per iSpot.

The emphasis on sports means that the big four broadcast networks and ESPN end up as the largest sources of impressions for auto brands. That said, automakers also expanded beyond just sports on these networks. On Fox, 1.2% of auto impressions were delivered during “The Masked Singer.”