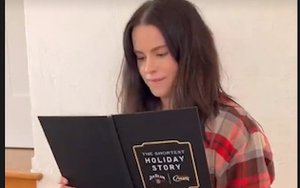 To launch the beverage, Jim Beam has partnered with actress Emily Hampshire (Stevie on the Emmy-winning comedy “Schitt’s Creek”) for a social media influencer campaign from adam&eve NYC.

The $19.99 kits contain several items that Jim Beam says will help buyers “speed through holiday formalities to get to the part of the festivities where you get to spend quality time with friends and family.”

Hampshire describes the contents in her first Instagram video of the campaign:

“Clear wrapping paper so you don’t have to waste time guessing what’s inside.”

“The world’s fastest board game, because board games take so long -- even if they seem like a really good idea at the time.”

“The shortest holiday story, so I don’t have to read a literal never-ending story.”

While the kit contains recipes for cocktails to be made with Jim Beam Bourbon Cream, it doesn’t include Jim Beam itself, which also costs $19.99 for a 750ml bottle at stores or via Drizly.

A Jim Beam spokesperson told Marketing Daily that the game board and shortest story were created specifically for the “Get to the Good Stuff” campaign.

The brand suggests serving the bourbon cream liqueur, described as “a balance of delicious cream complemented by bourbon notes of vanilla, caramel and oak,” either on the rocks or in a hot chocolate cocktail.

In addition to Jim Beam Bourbon Cream and flagship Jim Beam Bourbon, Jim Beam comes in 13 other varieties. They include its first flavored whiskey, Red Stag by Jim Beam Black Cherry launched in 2009, and its most recent, Jim Beam Orange, introduced in June.