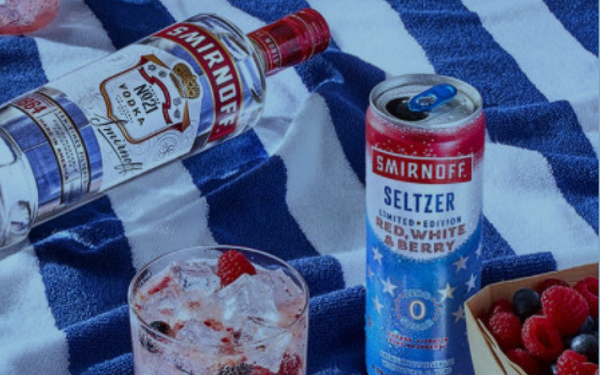 Image above: a retailer's July 4 Instagram promotion for Smirnoff.

Instagram is by far the most-used online promotional channel for wine and spirits retailers, according to a joint analysis of 13 retailers and 103 brands by Jenda Solutions, an alcohol data and technology firm, and DRAM Agency, an ecommerce agency formed recently by alcoholic beverage distributor Southern Glazer's.

“Providing branded content in Instagram-sized assets makes it easy for retailers to use,” the Jenda/DRAM report, titled “Winning eMerchandising: Beverage Alcohol Brands in the Digital Space,” suggested to brand marketers.

The report found that retailers promoted spirits brands 65% more often than wine brands over the summer.

The most-featured spirits brand was Smirnoff, followed by a three-way-tie between Maker’s Mark, 818 Tequila and Jack Daniels. By category, American whiskey was most featured, followed by tequila/mezcal and vodka.

The most-featured wine brand was Veuve Cliquot, followed by La Marca and Josh. By category, cabernet sauvignon was most featured, followed by chardonnay and pinot noir.

Father's Day was the holiday when retailers did the most alcoholic beverage promotions. The Fourth of July generated the most spirits promotions, however, and Mother’s Day the most for wine. However, 63% of promotions were not tied to any holiday, leading the report to conclude that “branded content that addresses the season or new products, as opposed to a single holiday/occasion focus, has broader use for retailers’ [online] placements.”

Drilling down, Jenda and DRAM found that the most popular day for activating spirits promotions was Wednesday, and the most popular time of day was 3 p.m. For wine, the results were Thursday and also  3 p.m.

“As online sales of beverage alcohol continue to grow, the importance of [emarketing] to beverage alcohol brands is certain to grow as well,” said Jenda CEO Harry Shulman. “We have been tracking brands’ efforts to be promoted on retailer and marketplace websites, social media accounts, and in email marketing campaigns for years, but the opportunities available to suppliers today are much more plentiful, and the positive impacts of being featured are far greater than ever before."

DRAM, an acronym for Digital Revolution of Alcohol Marketing, grew out of the increased need for ecommerce that began at the height of the COVID pandemic, Nathan Mansperger, vice president of B2C ecommerce for Southern Glazer’s, told Marketing Daily. “The beverage alcohol ecommerce business tripled seemingly overnight and many of our suppliers were looking for guidance on how to ensure their brands were front and center online. “

Over the past year, Southern Glaser’s said it has executed digital marketing campaigns for nearly 200 brands representing over 60 suppliers.

While Mansperger wouldn’t reveal any names, he said that the clients have included “everything from large global brands, to newly launched innovations, and everything in between.”

Then, “we decided to centralize this activity by creating DRAM Agency so we could provide more access, education, and support.”

Southern Glazer’s said DRAM’s services include online display advertising, digital out of home advertising, optimization of online content, and leverage of other ecommerce technologies to drive traffic and conversion.

“With this new agency service, Southern Glazer’s can provide industry-leading data and analytics, as well as media buying power to increase the efficacy of suppliers’ digital strategies and improve share of shelf across digital platforms,” said Mansperger.