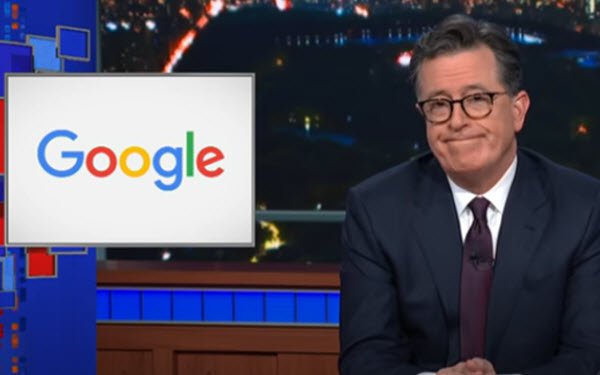 With the cooperation of ViacomCBS and hosts Stephen Colbert, James Cordon and Trevor Noah, Google pulled off a late-night coup on Wednesday.

Each of the hosts gave a callout to the tech giant and a new Google commercial on their respective ViacomCBS-broadcast shows, “The Late Show” and “The Late Late Show” on CBS, and “The Daily Show” on Comedy Central. (Clips of each embedded below.)

The hosts handled the placement differently, to mesh with their own personalities and show vibes, noted Variety, which first reported on the campaign.

For example, Colbert opted to replace one traditional ad break with the Google pitch, including a screening of the commercial. To position it, he asked his live audience, during the show, if they would like less advertising and “more show” — even if the “more show” was “basically also a commercial.”

The Google commercial features its annual compilation of the year’s most popular search topics. This year’s organizing theme: “People want to heal,” and they used Google to help do that, with searches ranging from “When can I get the vaccine” to “What is my purpose.”

Colbert wryly noted that he searched the latter question himself, and the answer was, “to bank some coin for CBS by doing product placement.”

Cordon presented his own rapid-fire summary of key events in 2021 as a sort of warm-up to showing Google's version.

Noah pushed his face toward the camera and said "hashtag ad" with an ironic smile before presenting the Google ad.

Google wanted to see how the hosts would present “their own personal, relatable, authentic representations of what made the year unique,” Jeffrey Whipps, vice president of marketing for the company, said in a statement.

Broadcasters do typically take in incremental revenue from late-night placements, including integration and production-cost fees, in some cases — but they might still pay less than they would for running an ad in prime time, points out Variety. They also get the benefits of integration in content focused on news and notable events of the day, and exposure through clips shared on social by the shows.