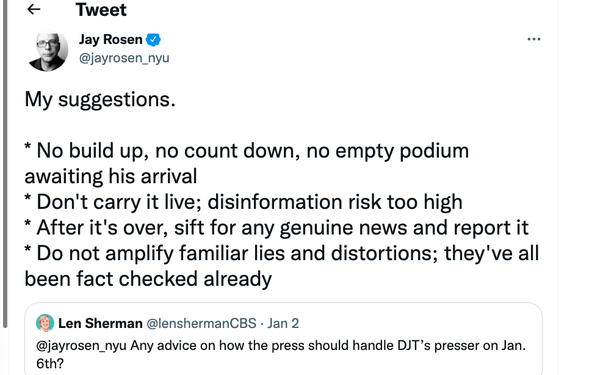 Full disclosure: This column is written by someone who stopped publishing the name of the former president years ago, because of a policy of not giving any media attribution to anyone who does harm with it. I adopted that policy after the Sandy Hook Elementary School massacre, and I began applying it to the former president in September 2018 for the same reason -- that he was using it to do harm.

So I had to chuckle when I received a request today from watchdog Media Matters for America not to provide live coverage of a press conference the former president plans to give on the anniversary of the Capitol insurrection he incited.

Instead of live coverage, which risks amplifying the incendiary nature of whatever he ends up using it for, Media Matters suggested the media utilize a set of recommendations given by New York University professor Jay Rosen:

Rosen is the same professor who recommended media outlets send their interns to cover the former White House's press briefings, and recommended the networks stop airing many of its briefings -- particularly its nutty, nonsensical and misinforming COVID-19 briefings -- live.

If only they had listened.

But the sad truth is that the news outlets that are most likely to adhere to these standards are also the ones least likely to be used by the former president's followers, which will only amplify the divide among us.

On the bright side, according to a Washington Post dispatch I received minutes after Media Matters', the "pro-Trump internet has descended into infighting over money and followers."

That makes sense given that much of everything the former president has done has been all about the grift, including the insurrection, and I wouldn't be surprised to see the twice-impeached former president use the anniversary as an opportunity to plug the social media company he is launching.

"The infighting reflects the diminishing financial rewards for the merchants of right-wing disinformation, whose battles center not on policy or doctrine but on the treasures of online fame: viewer donations and subscriptions; paid appearances at rallies and conferences; and crowds of followers to buy their books and merchandise."

So I guess that means it's actually "the ka-ching, stupid."