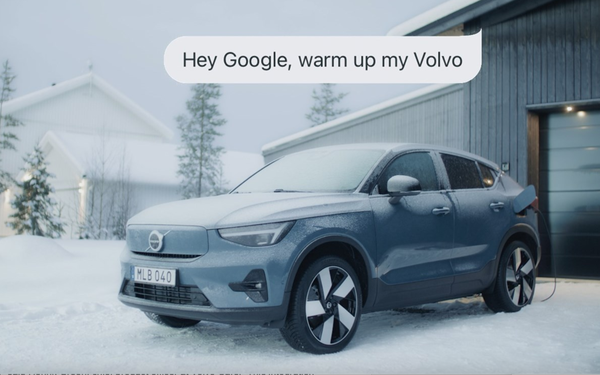 By pairing their Volvo vehicle with their Google account, customers can talk directly to Google in their car and remotely control a variety of functionalities, such as warming it up on a cold winter day.

For sensitive commands – such as unlocking the car – a two-factor authentication process ensures that only the appropriate people can order the action.

The list of available commands will continue to grow in the future, according to the automaker.

Planned future functionalities include charging scheduling, which allows customers to set specific times when they want their car to start charging.

“This integration allows us to improve the customer experience immensely, as it gives customers the possibility to easily and securely manage their car while at home or on the go, through any personal device that has Google Assistant,” Green says in a statement.

In other news, YouTube video playback will come to all Volvo cars with Google built-in.

“With YouTube and other major streaming services coming soon, our customers can enjoy their charging break instead of seeing it as just a hassle --making electric car ownership that bit easier,” Green says.

Safety is a integral part of Volvo’s brand ethos, so the automaker will only allow videos to be played when the car is fully stationary.

In addition to video playback, Volvo Cars and Google also announced that customers soon will be able to download navigation apps like Sygic and Flitsmeister, charging apps like Chargepoint and Plugshare, and parking apps like SpotHero and ParkWhiz where available.

This integration with the Google Assistant-enabled devices and the introduction of YouTube allows Volvo cars to act as an extension of drivers’ living environment, Green says.

“The car is a great venue for enjoying video and audio, so I would not be surprised if this means that people spend more time in their Volvos, even when they are not going anywhere,” he adds.