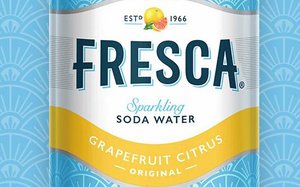 Constellation Brands on Thursday announced an agreement with The Coca-Cola Company to produce and market Fresca Mixed, a line of RTD cocktails based on Coke’s citrus-flavored soft drink.

Constellation said its research shows adult alternative beverages as an $8 billion segment that’s projected to grow 15%-17% annually over the next three years, “with trusted consumer brands commanding a significant share of the market.”

Fresca would seem to be one of those trusted brands, with Constellation noting it's now “the fastest growing soft drink trademark in The Coca-Cola Company’s U.S. portfolio,” according to Nielsen research.

Much of the brand’s popularity already stems from “its credentials as a popular mixer that lifts all spirits,” Constellation stated.

Topo Chico Hard Seltzer’s target audience is the “diverse, urban-dwelling, 25–34-year-old drinker,” and its agencies are ICF Next, Volt, Droga5, Volt and Connect.

Constellation Brands’ announcement of Fresca Mixed came as it released third quarter results showing a 5% decrease in net sales overall, but a 4% increase in beer sales -- driven by the continued success of Medelo Especiale, its Mexican beer which only began advertising to non-Hispanic consumers four years ago.  Modelo Especiale “continues to be the #1 brand in the high end, and #1 brand share gainer in the entire U.S. beer category in IRI dollar sales,” the company said.

Constellation’s Mexican brands, which also include Corona, will get a boost in the next few years as Constellation also announced it will spend $5 billion to $5.5 billion on capital expenditures from fiscal 2023 to fiscal 2026, including a new brewery.

Even before that vote of faith by Constellation, Modelo was in the midst of a big week as the official beer sponsor of the College Football Playoff series.

If a player game returns a punt for a touchdown during the game, as Howard famously did as a Michigan player against Ohio State 30 years ago, 300 entrants will win “free beer for the entire 2022 college football season” (actually, a $108 gift card).

Whether or not such a punt return occurs, a grand prize winner will win a three-day for two to the 2023 national championship game in Los Angeles.