Would You Buy Health Insurance From Mark Zuckerberg?

Over 60% of consumers in a new Reach3 Insights study said they’d like an alternative to traditional health insurance companies -- and 70% said they could be convinced to opt in to a health plan offered by a big tech data company.

Yet more than half those surveyed said they would never trust a big tech company with their personal health data. That stat was underscored when respondents were asked specifically which type of company or organization they would trust: the very health insurance companies they’re dissatisfied with scored high on that scale, with tech companies down on the bottom: 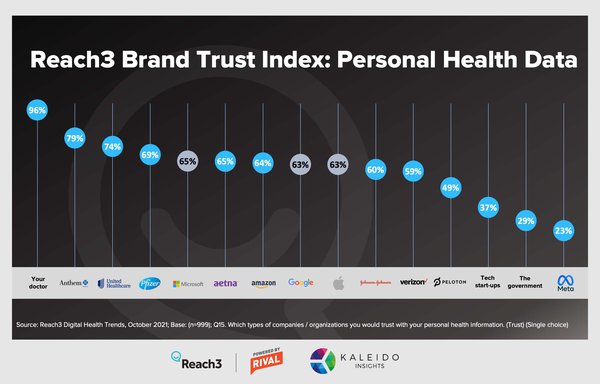 Simply put, those who scored highest in trust -- a list that included doctors, Anthem, United Healthcare, Pfizer and Aetna -- don’t yet provide the tech that consumers are itching for as part of their personal health needs.

Indeed, 48% of the 2,000 Americans aged 19+ surveyed by Reach 3 said they want more tech involvement in their health and wellness over the next five to 10 years. The desire was strongest among males, younger adults, parents and higher-income earners, with “boomers and women especially reliant on preserving the human connection in health tech.”

Owyang also pointed out that -- despite the majority saying they would never trust a big tech company with their personal data -- consumers are actually providing a lot more of that info to those who scored lowest in trust, such as the bottom-dweller, Meta (formerly Facebook).

The new Reach3 TrendSpot study, which the research firm said would be ongoing, also looked at the current and future popularity of health devices and apps, concluding that “target areas for future growth are fitness apps and devices, nutrition, mental health and wellness apps, scales and sleep trackers.”

Interestingly, mental health apps were particularly strong among Gen Z respondents, which Owyang said may be because such apps are targeting the cohort, since many of its members are unable to afford traditional therapy.

Speaking of the latter, Peloton scored quite low on the trustometer, beating only tech startups, the government and Meta in Reach3’s chart above of how much people trust 15 companies and organizations. Noting the string of bad press for the company, Reach3 CEO & Founder Matt Kleinschmit said “A couple of hiccups can really dent that degree of trust and confidence that people have.”

Owyang said he was shocked by another Reach3 finding: While 34% of respondents would like to know their life expectancy if it could be accurately projected, say by combining health apps with life insurance tables, the most they would be willing to pay for this info was $64 -- and up to $74 if suggestions for extending life were also included.

“Spanish explorers traveled across the world to find the fountain of youth,” Owyang declared. “For me, this is the golden product.”