Video beats other media hands-down when it comes to achieving advertising goals – and within video, TV in all forms has gained status in comparison to digital video.

That’s one of the takeaways from Advertiser Perceptions’ latest Video Advertising Convergence Report, based on a survey of 250 U.S. advertising executives (63% from media agencies, 37% from marketers) in October 2021.

Fully 50% of respondents said that video is most valuable in reaching goals/KPIs, versus just 16% for the second most-chosen media channel, search, and 10% for display.

Within video, 47% view all forms of TV — including linear, addressable and CTV/OTT — as most effective. While that’s basically tied with digital video, at 46%, TV is up from 36% choosing it last year, while digital video is down from 53% a year ago.

Short-form professional video tops advertiser rankings for meeting advertising KPIs, with 61% putting it in the top three of all formats, followed by full episodes (54%). That’s ahead of social media influencer videos (49%), user-generated video (39%) and advertising in sporting events (36%, down from 44% a year ago). 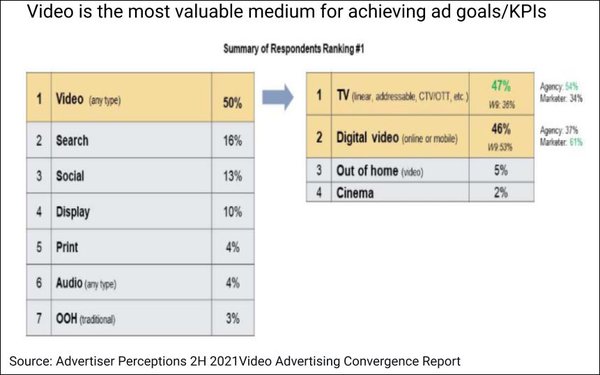 Budget-wise, half of respondents said they’ll be investing more in video advertising in 2022. The average increase was 25%, and 75% said they will increase their overall budgets to accommodate the additional video spend.

When it comes to the size of budget increases, standard linear edged out the rest, with an average of 19%, followed closely by data-driven linear (18%), addressable linear (17%) and OTT/CTV (16%). vMVPDs and STB VOD lag a bit, averaging 13% each. 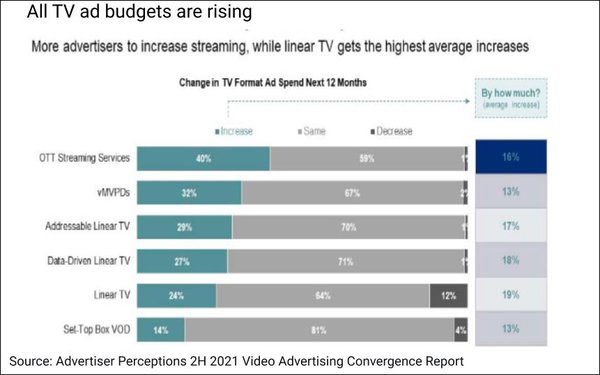 “The rising video tide is lifting all boats, just not equally,” sums up John Bishop, vice president/business Intelligence at Advertiser Perceptions. “Streaming is attracting priority attention as the medium adds content and audiences, while linear TV continues to get the highest dollar volume. As streaming grows in forms and value, we can expect to see more innovation and advertiser investment.”

Notably, well over half (57%) used programmatic for OTT streaming services. And according to the researchers, advertisers expect this to increase again this year.

The second half of 2021 showed big jumps over the first half in programmatic buying of video ads on social media, video sites, mobile ad platforms and linear TV, they report. 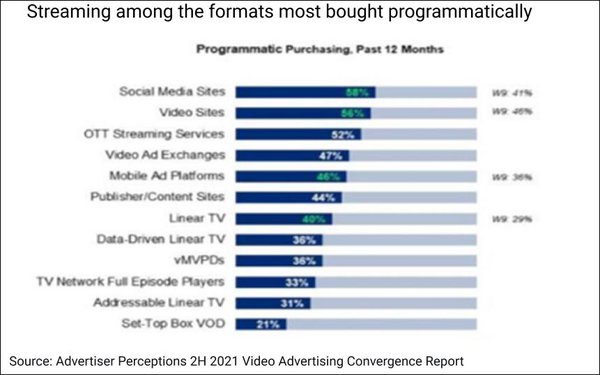