Simply Put, Coca-Cola And Molson Coors Are Now An Item 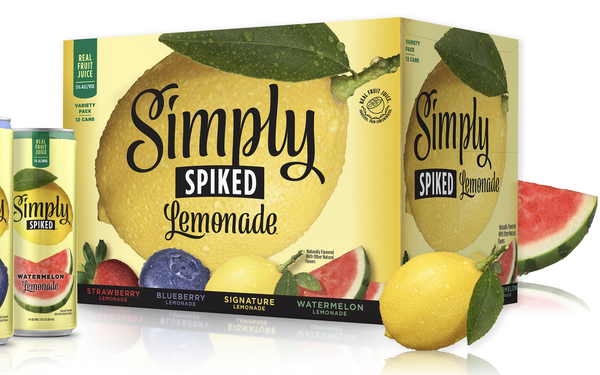 A year after their successful consummation for Topo Chico Hard Seltzer, Coca-Cola and Molson Coors are at it again, this time announcing an upcoming summer launch of Simply Spiked Lemonade in four flavors: “signature,” strawberry, watermelon and blueberry.

The new brand, Molson Coors said, is “inspired” by Simply juices, a line launched originally in orange flavors by Coke’s Minute Maid unit in 2001 that has since developed into Coke’s second-largest brand revenue-wise ($1 billion+) after only Coca-Cola itself.

Indeed, “Simply can be found in one of every two American households,” Molson Coors declared.

For Molson Coors, its relationship with Coca-Cola has been a blessing,

During a year of reckoning for the hard seltzer category, in which Molson Coors even discontinued Coors Hard Seltzer, Topo Chico Hard Seltzer became a genuine hit with its regional rollout in 2021. The brand just expanded to national distribution this month -- backed by a tripled marketing investment and a national ad campaign using TV, online video, podcasts, paid and organic social media, and social influencer marketing.

As for Simply Spiked Lemonade, one of its competitors in the alcoholic lemonade space will be Molson Coors’ own Vizzy Lemonade Hard Seltzer, an immediate hit last year, which helped drive a 1 point U.S. category share gain during its introductory quarter.

In a statement, Molson Coors chief marketing officer Michelle St. Jacques, lauded Vizzy along with Topo Chico and Dwayne Johnson’s Zoa energy drink as notable success stories over the past two years of “new brands that have clear, compelling points of difference…Now, we have a huge opportunity to leverage the power of Simply– a brand known for real juice and big flavor – to disrupt the full-flavor alcohol segment in a way that’s never been done before.”

Also on the citrusy alcohol front, Boston Beer has teamed with PepsiCo to launch  Hard Mtn Dew, based on the lemon-lime tasting soft drink.

And PepsiCo rival Coca-Cola, In addition to Simply Spiked Lemonade and Topo Chico Hard Seltzer, has teamed with Constellation Brands for the upcoming Fresca Mixed, based on that citrus-flavored soft drink.

Yes, in the new world of muddled drink categories, where relationships are hardly exclusive, you can hardly tell the dalliances without a scorecard.