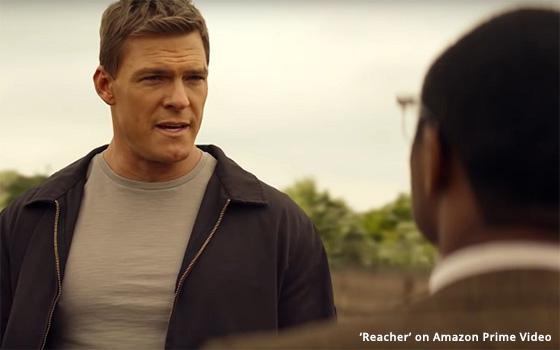 Having never seen the two Tom Cruise “Jack Reacher” movies, comparing them to the new “Reacher” TV series coming this week to Amazon is largely impossible.

But even sight-unseen, Cruise and Alan Ritchson (pictured above) -- the actor playing the character in the new series -- can be compared on a purely physical level.

Tom Cruise is 5’7,” and let it be said that he has succeeded handsomely as a movie action figure. But he is no Alan Ritchson.

This actor is 6’2” in real life, but in “Reacher,” he is said to be 6’5.” He is so imposing that you believe he is three inches taller on the show than he is in real life.

And since he is also built like a brick you-know-what, almost every scene he’s in can fill a viewer with edge-of-their-seat anticipation at what he will do next.

This feeling in the gut and down the spine is particularly acute in scenes where Reacher is menaced by a group of thugs. Most of these have the potential to turn into explosive events.

The only thing unknown about these interludes before they begin is the nature of the hurt this one-man army will eventually put on them.

These scenes, and indeed this whole show, bring real, pulse-pounding action to television in a way that has rarely been seen before.

The high quality of this show begins with Ritchson, who plays a man of few words who seems unmoved by anyone and anything, no matter how threatening.

In a performance that is a marvel of consistency, Ritchson remains true throughout the show to this portrayal of a man with one name (he insists on being called Reacher, and not Jack or Mr. Reacher) who is part Clint Eastwood and part Jason Bourne.

In this eight-part TV series, Reacher suddenly ambles into a small town in Georgia for reasons that he keeps to himself.

Suffice it to say that trouble finds him there in the form of a mystery involving multiple murders and a cover-up that probably involves the town’s most powerful players.

The Jack Reacher character springs from the novels of Lee Child. This show is based on one of them titled The Killing Floor.

The show’s first episode even begins and ends with well-chosen music. The opening has the blues classic “Smokestack Lightning” by Howling Wolf, and the end-credits have “Can’t You Hear Me Knocking” by the Rolling Stones.

From start to finish, this show is so engrossing that it was difficult to stop watching it when I previewed it on Monday. As a result, this TV Blog almost never got written.