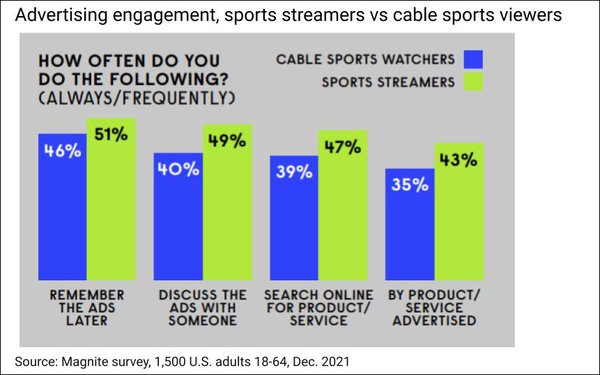 More sports viewing — including live sports viewing — is shifting to connected TV (CTV), and sports streamers indicate somewhat higher engagement with the ads than cable sports watchers or the general adult population, according to a new survey.

Magnite, an independent sell-side ad platform that supplies live sports and other programmatic ad inventory, surveyed 1,500 U.S. adults (18 to 64) who watch at least seven hours of TV per week. The study was fielded Dec. 23-30, 2021, and results were weighted to be nationally representative.

Compared with cable sports viewers, more sports streamers reported remembering the ads later, discussing ads with someone, searching online for the advertised products or services, and buying the product/service (chart above).

In addition, compared to all adults surveyed, more streaming sports viewers said that the ads are an important part of the viewing experience, are open to watching streamed ads to get access to quality content, and have discovered new products as a result of streaming ads.

Access to live sports has been the top reason for retaining cable TV subscriptions, but consumers have become more aware of the growing availability of regional sports networks and even marquee live sporting events through live-streaming virtual multiplatform video programming distributors (vMVPDs).

Live sports streaming now accounts for 30% of all CTV streaming, and 70% of live sport viewing is in real time, despite the ability to watch the sports on-demand on a delayed basis, according to Magnite. (For instance, 90% of fuboTV users watch live TV, and 93% of sports content on that service is viewed live.)

In addition, 87% of live sports streamers said they were likely to watch pre- and post-game shows on CTV.

Still, it appears the streaming platforms could benefit from more awareness-building about streaming live sports: While 22% of cable subscribers surveyed said they plan to cancel cable within the next six months, 44% said they would cancel cable “if” they could access live sports and events through streaming.

“We should expect to see more cord cutting as streaming providers continue to expand their live sports offerings and increase their audience-building marketing efforts,” notes the report.

These streamers are also more likely to watch multiple ad-supported services (an average of 3.6 sports apps).

Here’s a breakdown of the percentages of users of ad-supported streaming services and of live streamers among the survey sample, by generation: