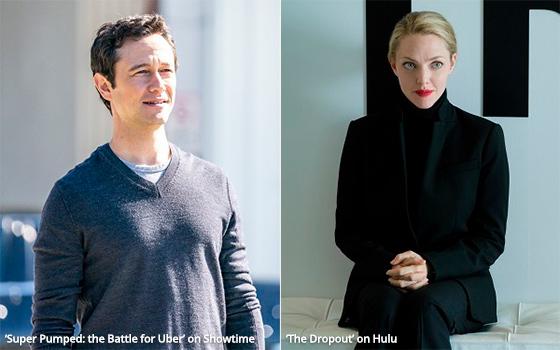 TV has discovered the disruptor generation.

Two brand-new limited series premiering this week appear to be part of a growing trend in which some of recent history’s most notorious innovators and disruptors are getting the scripted-TV treatment.

The two series premiering this week take on the stories of Travis Kalanick, brash co-founder of Uber, and Elizabeth Holmes, ill-fated founder of the biotech company Theranos.

They are both “rise and fall” stories. The Kalanick series, titled “Super Pumped: The Battle for Uber,” tells how Kalanick, played by Joseph Gordon-Levitt (pictured above), was ousted as Uber CEO in a boardroom coup.

The multipart series premiered this past Sunday (February 27) on Showtime. It frames the Kalanick story as a struggle between Kalanick and his main financial backer and one-time mentor Bill Gurley (played by Kyle Chandler), who is depicted in the series as the principal engineer of Kalanick’s removal.

The series boasts an A-list cast that includes Uma Thurman as Arianna Huffington and Elisabeth Shue as Kalanick’s mother Bonnie (who was killed in a boating accident in 2017 at age 71).

Meanwhile, the story of Elizabeth Holmes, who was once the youngest female self-made billionaire in America, is told in “The Dropout,” premiering Thursday (March 3) on Hulu.

The title derives from part of her origin story. A brilliant high school student from Houston, she was accepted at Stanford, but dropped out in 2004 during her sophomore year to turn her attention to building her company.

She founded Theranos a year earlier, in 2003 (when she was still a freshman, according to online sources), and was convicted of defrauding her investors this past January. She is scheduled to be sentenced in September.

Between 2003 and 2015, Holmes built a company that was said to be worth $9 billion. But, as an in-depth investigative story in The Wall Street Journal reported in 2015, its value was based on fraudulent claims about the innovation upon which the company was created.

This was a process for conducting comprehensive blood tests from just a drop or two of blood taken in a single finger prick instead of vials of blood withdrawn by needles.

To put it bluntly, this process did not do what Theranos claimed it would -- something Holmes and others knew full well.

In “The Dropout,” Holmes is played by Amanda Seyfried (above photo). Naveen Andrews plays Sunny Balwani, chief operating officer of Theranos who was romantically involved with Holmes and also indicted on fraud charges.

“Super Pumped” and “The Dropout” both use a similar storytelling device. Each of them starts with their title characters at the top of their games -- Kalanick before his ouster in 2017 and Holmes before the roof caved in, in 2015. It then flashes back to each of their origin stories years earlier.

“Super Pumped: The Battle For Uber” is adapted from a best-selling book by Mike Isaac. Apparently, Showtime intends to establish a “Super Pumped” franchise in which future series will tackle the life stories of other leading lights of the disruptor era.

This second “Super Pumped” series will also be based on a book by Isaac about Zuckerberg and Facebook that is not yet published.

Who’s next on TV’s disruptor hit parade? More of these already in the works could not be found in a Google search, but the TV Blog has a few suggestions.

Speaking of Google, how about a “Super Pumped” on the story of Google founders Larry Page and Sergey Brin, or Netflix founder Reed Hastings?

And here’s a dark horse candidate that has yet to get the scripted-drama treatment -- notorious “Pharma Bro” Martin Shkreli.